You are here: Home / film, documentary, theater, arts / Must see documentary, ‘UPRISING: Hip Hop and the LA Riots airs May 1 on VH1 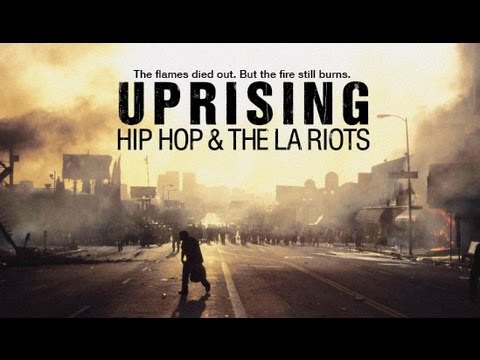 Any American who was at least 10 years old in 1992 is painfully familiar with the Los Angeles (LA) Riots like we’ve grown to know “Katrina” and “9/11.”  Mark Ford takes a look 20 years later in his documentary “UPRISING: Hip Hop and the LA Riots.”  The documentary, directed by Mark Ford and narrated by Snoop Dogg,  premiered at the 2012 South by Southwest music festival (better known as SXSW) and airs tonight (May 1, 2012) at 9:00 PM ET/PT on VH1 as part of their VH1 Rock Docs series.  Besides his infamous remark “Why can’t we all just get along?” Rodney made his way further into pop culture by appearing on season 2 of VH1’s Celebrity Rehab with Dr. Drew as well as the spin-off “Sober House with Dr. Drew” season 1.

Around 12:30am on March 3, 1991, Rodney King was arrested and beaten by LAPD.  The beating was caught on tape by nearby resident and witness George Holliday.  When the tape was released to the media, it sent the nation into a national outrage about another case of police using excessive force.  After an investigation, LAPD Sargeant Stacey Koon and officers Laurence Powell, Theodore Briseno, and Timothy Wind were indicted in connection with the beating.  The nation was shocked and angry when, on April 29, 1992, Sergeant Koon, Officer Briseno, and Officer Wind were acquitted of all charges; and the jury was not able to reach a verdict on Officer Powell.  For the city of LA, particularly the African American community, it fueled a rage about the injustices of police and the legal system that could no longer be contained.  South Central LA erupted into violence and looting for five days that left 53 people dead, hundreds of millions of dollars of losses from local businesses, and the infamous Rodney King quote, “Why can’t we all just get along?” (sources: University of Missouri- Kansas City “The LAPD Officers’ Trials: A Chronology,” The Oregonian, and FOX News “For 22 murder victims, LA Riots leave a legacy of justice eluded“)

“Rage seeps in when the verdict is announced ‘not guilty’.”