I’m so excited to see this press release land in my inbox today.  Which of the first four seasons’ contestants would you like to see come back and compete on “All Stars: RuPaul’s Drag Race” (All Stars: RPDR)? During season 4 of RPDR, join me for the live chat on LogoTV.com Monday nights at 10 PM PT (during the west coast airing of the show). ~Ifelicious 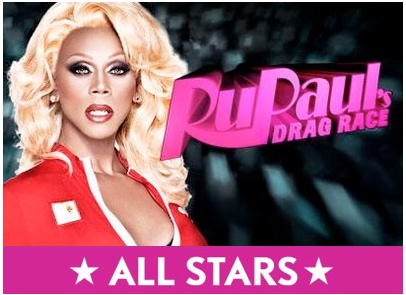 An excited RuPaul exclaimed, “’RuPaul’s Drag Race’ is a show that not only champions talent and artistry, but it’s also launched a new generation of entertainers that are working throughout America seven nights a week! Drag has come out of the closet, and it’s not going back!”

The fourth season of “RuPaul’s Drag Race” is currently in full swing on Monday nights at 9:00 PM ET/PT on Logo. RuPaul, the world’s most famous drag queen, has pushed the boundaries of popular culture on an international level and continues to make history this season with “RuPaul’s Drag Race,” the first reality television show featuring drag queens. Each week RuPaul decides who will “shante! stay!” or “sashay away” with a new batch of the nation’s hottest, most glamorous drag queens. In the end, only one contestant will have what it takes to win the coveted title of “America’s Next Drag Superstar,” and a prize package that includes a headlining spot on Logo’s Drag Race Tour, featuring ABSOLUT® Vodka, cocktails perfected, a one-of-a-kind trip courtesy of AlandChuck.travel, a lifetime supply of NYX Cosmetics and a cash prize of $100,000.

Logo celebrates one-of-a-kind personalities, unconventional stories and discovering what’s next—all through a mix of original and acquired entertainment that’s outrageous, smart, and inclusive. Entertaining a social, savvy audience of gay trendsetters, Logo also attracts a straight audience that wants to be ahead of the curve. Launched in 2005, Logo is in nearly 50 million homes across the United States, and is complemented by a federation of online properties, including LogoTV.com, NewNowNext.com, AfterEllen.com, AfterElton.com, and DowneLink.com. Logo is part of Viacom Inc. (NASDAQ: VIA, VIAB), which features a roster of popular and highly targeted brands that include MTV, Comedy Central, VH1 and Spike TV.

About World of Wonder

Innovative production company World of Wonder is behind such entertaining hit series as “Girls Who Like Boys Who Like Boys” (Sundance Channel), “RuPaul’s Drag U” (Logo), “Million Dollar Listing” (Bravo), “The Fabulous Beekman Boys” (Planet Green), and “Finding Sarah” (OWN). World of Wonder has also created award winning films and documentaries such as “Inside Deep Throat,” “The Eyes of Tammy Faye,” “Party Monster,” “Monica in Black and White,” and “The Last Beekeeper,” which won a 2010 Emmy® Award for Outstanding Nature Programming. They recently premiered their latest documentary “The Strange History of Don’t Ask, Don’t Tell” for HBO, which chronicles the repeal of the controversial military policy. Most recently, their 2011 Sundance Film Festival hit “Becoming Chaz” and HBO special “Wishful Drinking” both garnered a total of five Emmy® nominations.

With offices in Hollywood and London, the company has produced cutting-edge fiction and non-fiction programming for HBO, Showtime, VH1, IFC, Discovery, MTV, BBC, PBS, Channel 4 UK, and other digital outlets that can be found online at worldofwonder.net. The WOW Report receives more than 100,000 visitors a month.

Read all of my blog posts about “RuPaul’s Drag Race” including outside links to view my exclusive red carpet interviews and photos with your favorite cast members- past and present- just CLICK HERE!