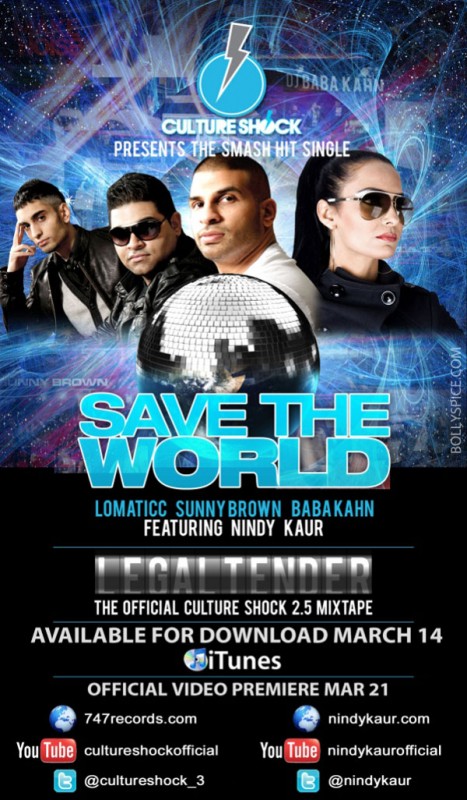 (Press Release via Bolly Spice) — International music icon and Bollywood songstress Nindy Kaur is raising the bar with the launch of her new single “Save The World,” a pure adrenaline, feel-good dance anthem of 2012. The song will be available for exclusive download from iTunes on March 14th, 2012. Appealing to the masses, “Save The World” boasts a unique fusion of an up-tempo and addictive mainstream dance rhythm with Nindy’s trademark Punjabi kick, making it a global dance floor hit.

Famed for her lead vocals on Bollywood chart-toppers “Kambakkht Ishq,” “Aloo Chaat,” “Yamla Pagla Deewana” and “Char Din Ki Chandni,” with international music stalwarts RDB, alongside her urban smash-hits “Akhian,” “Deewani” and “2 Seater,” Nindy has taken the steps to solo stardom and the result is her rising status as the one to watch star of 2012. 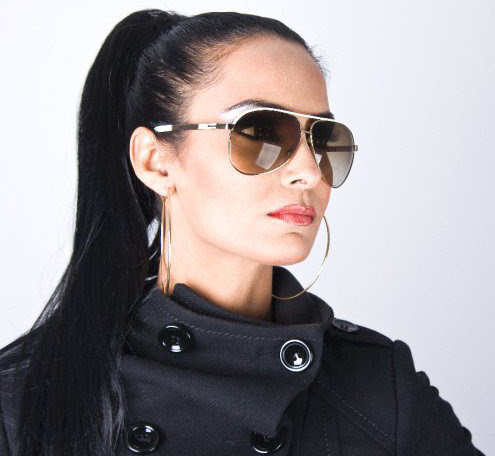 Nindy Kaur has successfully released her first two hit singles from her debut solo album, “Nindypendent,” which entered straight into the number one spot on the Indian music charts. Now, “Save The World” marks Nindy’s first collaboration outside the RDB camp, collaborating with Culture Shock, who have previously worked with artists such as Lady Gaga, Rihanna, Sean Paul and Nicole Scherzinger for Bollywood and Desi-inspired official remixes of their tracks. “Save The World” will also be featured on “Nindypendent” as a remix version, set for release this summer.

In speaking about her solo project, Nindy:

“My fans will notice that this is the first time I’m collaborating outside the RDB camp; but the aim is to pursue my own solo career, which has always been a dream. This is the first of many and I can’t wait to take the stage and shine as a solo artist. And yes, with that said, we are working on my own world tour which is coming soon. Working with Culture Shock on this track has been an amazing experience. Baba Kahn is a great producer; and when you’re in the studio with Lomaticc and Sunny Brown, magic is bound to happen. It didn’t feel like we were working together for the first time; there was great musical chemistry!”

Born and raised in the UK on the traditional sound of Bhangra music, Nindy Kaur is a household name in India, and a well known leading playback singer in Bollywood. Signed to independent label Three Records, Nindy’s sound mixes traditional Bhangra beats with elements of mainstream dance, R’n’B and Pop. As well as her solo projects, Nindy also regularly collaborates with international urban chart toppers RDB and together they are known as the Indian version of The Black Eyed Peas. She is also an ambassador for the International Indian Film Awards (IIFA), the Indian equivalent to the prestigious Oscars, where she has performed her debut single, “Akhian,” to a global audience of over 60 million during the awards ceremony.

Fans are able to download the track for free at www.facebook.com/cultureshockfans.