Diggy fans will be pleased to know that Diggy has finally revealed the name of his album…”Unexpected Arrival.”  It will be released on March 20, 2012 via Atlantic Records.  He decided to share the news via a vlog post shown below:

Diggy is also headlining his own “Life of the Jetsetter” tour beginning Feb 10, 2012 in Atlanta.  Joining him on the tour are Jawan Harris, Tk-N Cash, Jacob Latimore, and the OMG Girlz (source: HipHopConnection.com).  Check out the tour dates below.  Tickets can be purchased on Ticketmaster. 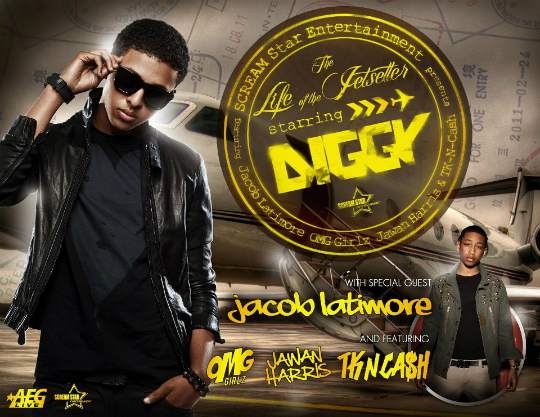 2012 Life of the Jetsetter Tour Dates

Missed my backstage interview with Diggy when he performed at The Rave in Milwaukee while on the Scream Tour?  Check it below:

Here’s also my backstage interview with Jacob Latimore at The Rave in Milwaukee.

LATEST VIDEO FROM DIGGY “Do it Like You” f/ Jeremih