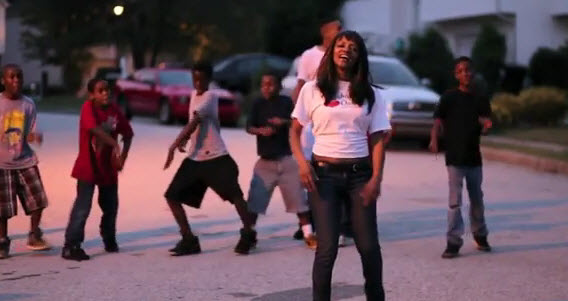 Man down code 10…
Hold on, catch a breath…
Do the old folks…
In a hover round
At Kroeger
At Payless
Shout out to Michelle Obama as well

Just taste those dope lyrics…no pun intended.   😉   If you recall in my September 30, 2011 post “Frankie Lons mother of Keyshia Cole releases single with a dance called ‘The Frankie Leg’,” Atlanta based Frankie Lons released a teaser behind the scenes video for her song that narrates her original line dance.  WorldStarHipHop debuted the official video for “The Frankie Leg” yesterday.  It is also available for download on iTunes.

Love it or hate it, I’m sure you’ll be seeing folks rushing to the dance floor when this song comes on in the club! I ain’t gonna lie, I secretly love it! The words are hilarious, Frankie is hilarious, I love learning line dances, and the song is catchy.

Watch the video.  It’s sure to be a crowd pleaser at all of our holiday parties! 😛

Earlier this year, Frankie was also reportedly working on a book entitled “Two Sides to Every Story” but I haven’t seen any recent reports that it has been released.  She’s lived a colorful life so I’m sure it could be quite the page turner if written well.