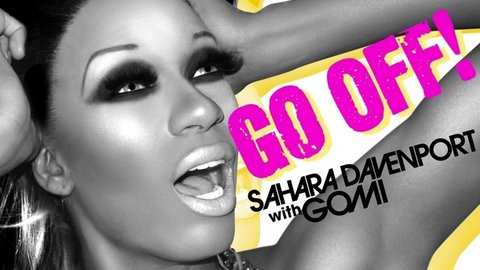 I’m not gonna lie.  I wasn’t expecting much when listening to Sahara Davenport’s “Go Off!” but the dance track and now video is super catchy.  Watch it below and you’ll be hooked, too. This is going on my playlist for sure. ~Ifelicious

VIDEO: “Go Off!” by Sahara Davenport

Television drag star Sahara Davenport’s video for her sophomore release “Go Off!” (available on iTunes and Amazon) is one of the best videos to not only come from a drag racer, but also any reality star in a while. While the video for her debut single, “Pump With Me” (available on iTunes and Amazon) was fast moving and colorful, Davenport says, “I wanted to go with a cleaner and less busy approach. I want the viewers to be able to enjoy the pictures and grab the meaning of the song.” This is all accomplished in a very picturesque and seductive manner. Davenport known for her high kicking and energetic performances on “RuPaul’s Drag Race” (including the most talked about performance where she lip-synced for her life while on pointe) employs the same contagious energy in the video (which includes gorgeous contemporary choreography that makes you want to dance). Hot off the tails of her debut single, “Pump With Me,” which Michael Musto of the Village Voice described as the latest celebutant scent, “we need to bottle her up and pass her around!”

In the video, Sahara Davenport goes full circle and reunites current and past cast members in the video for her new sophomore single “Go Off!”. Her everlasting talent and creativity are emulated in this video with guest appearances by season three runner-up, Manila Luzon, and just announced season four contestant Jiggly Caliente. The “Go Off!” video is the drag-stitch that reunites and binds the seasons into a reminiscent triple threat.

“I loved the high energy.” “High quality and Very catchy.” Are a few of the phrases overheard at her the video release party last week in a packed house at Industry Bar in Hells Kitchen. In this video, Sahara Davenport definitely proves that she is a force to be reckoned with. Davenport is arguably the most talented artist to leave the RuPaul institution and leads the race of potential and promise.

Davenport’s sophomore single “Go Off!” was released to rave reviews and made a splash landing on the iTunes top 200 Dance Singles Chart. Sahara’s vocal talent and writing abilities caught the attention of international superstar DJ Manny Lehman which sparked the release of a remix EP slated for release in late November. It will feature remixes from John Rizzo, Jaime Sanchez, Vjuan Allure, and Joey C of DivaNation. To further broadcast her fabulous fashion and dancing abilities, Davenport has produced a music video for “Go Off!” which will be released and broadcast on MTV Networks LOGO TV’s Poplab program.

Check out this article written by Stevie of OutSpoken NYC “Sahara Davenport ‘Go Off!’ interview and video premiere.”