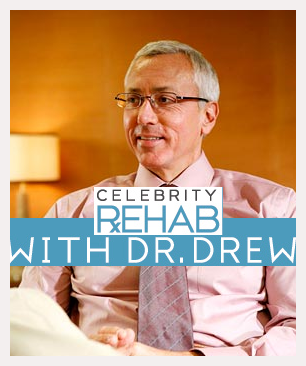 For almost five years, the genre-defining reality series “Celebrity Rehab with Dr. Drew” has enlightened viewers about the painful and trying path to recovery for people with alcohol and drug addictions. Anyone familiar with the treatment process for addiction knows that recovery is a lifelong process and some succeed where others fail. Life outside the protective environment of rehab is rough as patients can fall into old routines and potential relapse

Specials are each week at 9pm ET/PT (8pm Central) with airdates and featured patients as follows:

Dr. Drew is the host of the nationally syndicated late night radio show “Loveline” as well as a respected practicing MD, board certified in internal and addiction medicine, who is staff at Huntington Hospital and assistant clinical professor of KECK USC School of Medicine. Additionally, he is hosting a new primetime show on HLN called “Dr. Drew” and is hosting a daytime talk show “Dr. Drew’s Lifechangers” on the CW. He is the author of the New York Times best seller “The Mirror Effect: How Celebrity Narcissism is Seducing America” (Harper Collins) and “Cracked: Putting Broken Lives Together Again” (Harper-Collins). Dr. Drew co-authored the first academic study on celebrities and narcissism that was published in the “Journal of Research in Personality” (Elsevier) in September 2006, and is the first systematic, empirical scholarly study of celebrity personality. Dr. Drew hosted VH1’s “Sober House” and “Sex Rehab with Dr. Drew” and can be seen on MTV’s “Teen Mom” and “16 & Pregnant.”