You are here: Home / Beauty/Fashion / Joe Zee’s 2nd season of ‘All on the Line’ returns to the Sundance channel on Nov 25

Joe Zee is the man!  I hope I get to meet him in person someday and also feature him on my blog.  Talk about someone who possesses both fashion and business acumen, he’s someone who’s successes and ability to be direct yet compassionate I admire.  I’m not a fashionista (although i’m a fashion voyeur), but even watching his show over the first season, I have a different eye when out and about shopping.  It’s funny, how I’ll critique a designer to myself and think that they need some help from Joe Zee.  Even though my brand is a blog, I found his approach to dealing with the featured designers translatable to any small business owner.

Anyhooz, I’ve already programmed my DVR and can’t wait for the season 2 premiere on November 25.  The lineup of designers on this season is included in the press release below.  I also included the season 2 trailer and some additional video clips. ~Ifelicious

p.s.  Why does seeing Olivia Palermo as a featured guest on season 2 still make me scowl?  I can’t get past the way we saw her on MTV’s “The City.” 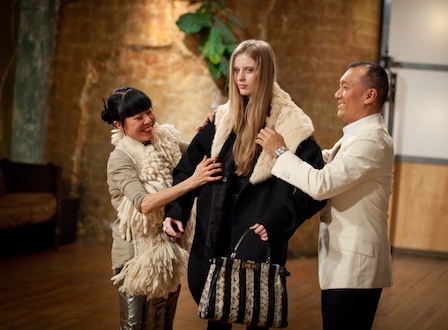 Nicole Miller Among the Designers Seeking Zee’s Help in Season Two of “All On The Line with Joe Zee” Premiering November 25, 2011.

New York, September 14, 2011 – Sundance Channel is putting a new group of designers through fashion rehab in season two of the critically-acclaimed series, “All On The Line with Joe Zee.” Starting Friday, November 25th at 9:30pm ET/PT, Creative Director of ELLE Joe Zee, who The New York Times deems, “Fashion’s approachable ambassador,” will come to the rescue of designers in need of a makeover on their business, design or both in what The Huffington Post called a “must-see” show. Among the designers featured in the upcoming season, is modern-day fashion legend, Nicole Miller, who will work with Zee to launch her newest line at New York Fashion Week 2011.

Returning slightly altered, this season Zee will enlist the help of some of his industry friends including American fashion designer, Rachel Roy, socialite and fashion trendsetter, Olivia Palermo, rock musician Adam Lambert, Mark Badgley and James Mischka of Badgley Mischka and model and actress Veronica Webb, to help judge the designer’s ability. Each label will be put to the challenge when Zee asks the team to design quickly and outside of their comfort zones for one of these celebrities, who may or may not be typical of the label’s core clientele.

Each hour-long episode will explore one label; unraveling the intricate stitching of their business, dissecting their staff and breaking down their design, to discover the glitch that has brought them to the brink of losing it all. Featuring six new labels, with six new problems, Joe Zee will recommend how each designer can alter their business and design so that it fits just right. Throughout the process, he hopes to successfully re-inspire and re-launch their line.

From renowned American-designer, Nicole Miller who is learning to reach out to a new generation of customers, to Aysha Saeed and Angelo Lambrou, who need a big buy to continue their lines, each designer is desperate to keep their dream alive, bringing high fashion, high drama and high stakes to the weekly series. Joining the forces of his expertise with his little-black-book of fashion insiders and influential industry friends, Zee will set up each label with buyers from major stores and exclusive boutiques including Bloomingdales, Scoop, Lane Bryant, Edit and Cusp for what could become the opportunity of a lifetime.

I had an amazing experience in season one helping a group of talented designers continue to do what they love, and I found the result just as rewarding for me, as it was for them. I’ve followed some of these designers throughout my career, and I truly feel indebted to them for inspiring me and so many other fashion enthusiasts throughout the years.

This season, viewers will be introduced to the staff behind:

After over twenty years as a household name in the fashion industry, Miller has engaged Joe to help her garner big attention at Fashion Week with a line that is hip and cool and that will appeal to a younger generation. Joe demonstrates to them how utilizing celebrities and blogs is a better way to reach their target customers and will help her become an even bigger and better label.

Queen Latifah, Wendy Williams and Janet Jackson have all worn this “plus-sexy” line, which has been sold in over 30 boutiques in its twelve year history. Featured in Essence and Jet, the buzz and design is on point, but its staff is not. Scrambling to complete last-minute fittings for meetings with major buyers may be the reason they can’t land the big sale that will keep them afloat. It’s always been a rat-race for Qristyl Frazier Design, but they are desperate to keep up. Joe thinks a buyer’s meeting with Lane Bryant will be the perfect fit, but it will be up to the staff to make sure they’re prepared.

After designing custom garments for Stevie Wonder, Michelle Pfeiffer and Sophia Bush, married couple, Kathy & Erik Wilson thought their struggling days were over. For years Kathy has excluded Eric from the line even though he is a partner. Now she has to include him and he has to step up and they have to become a real partnership in the business just like they are in their marriage. Willing to name their first-born after Joe Zee in return for a successful turnaround, the couple realizes it’s time to fight as a team, and get it together for their meeting with exclusive boutique, Scoop.

South-African native, Angelo Lambrou came to America to pursue his dreams of becoming a designer. His celebrated bridal line, which has been sold in Kleinfeld Bridal and Gabriella New York, and featured in ELLE, In Style, People, Cosmopolitan and Brides, has been on a rollercoaster ride of ups and downs, but has officially reached rock-bottom. Due to lack of sales, PR and man-power, Angelo Lambrou was on the verge of closing earlier this year but a meeting with New York boutique, Edit, may be their last chance to seal a deal.

Aysha Saeed is in a committed relationship…with her fashion line. After putting aside her dreams of getting married and having children,
her biggest problem may be that she’s a little too focused. Her staff describes her as demanding and ambitious, and she has admittedly fired more people than she cares to remember. Although her line has been featured in In Style, Lucky and Women’s Wear Daily, it has not brought in enough revenue to cover her debt to credit cards, banks and family members. Aysha is no push-over, but will need to learn how to take un-welcome advice, when Joe Zee steps in to help her prepare for a meeting with major department store, Bloomingdales.

When designer Cesar Galindo lost partner of six-years, Seth, to colon cancer, their joint fashion line came to an end. Without Seth’s incredible sense of style and business savvy, Cesar was afraid he couldn’t keep it together on his own. Now, over two years since Seth’s passing, Cesar picked up the pieces and rediscovered his passion for fashion with his new line, Czar. Working tirelessly with his new business partner Dana, Cesar has successfully created a line that has dressed the likes of Gwen Stefani, Missy Elliott, Mary J. Blige and Sarah Jessica Parker. After refining his vision, Cesar needs Joe’s help to launch this ‘take-two’ line.

Season one of “All On The Line” captured ups and downs ranging from the resurrection of queen of the 80’s Power Suit, Gemma Kahn, to lingerie designers Between the Sheets refusing to take Joe’s advice. The series premiered with Radenroro, a line seven seasons old that fought to be recognized in the fashion industry. After Zee worked tirelessly with the designers, he set up a visit with Loretta Soffe, Nordstrom EVP for Women’s Apparel. Making for a real-life fairy tale ending, she ordered the line, and Radenroro made its debut in Nordstrom, the line’s first department store. Viewers can expect to see more of Zee’s little-black-book of fashion insiders and influential industry friends, as he works to inspire and launch these designers, continuing to make dreams come true.

About “All on the Line”

“All On The Line” is produced by Authentic Entertainment. Nicole DeFusco is Executive Producer for Sundance Channel.

As Creative Director of ELLE since 2007, Zee has helped to further elevate the publication into the successful fashion magazine that is today. He began his career at Allure Magazine and from there became the fashion director at W Magazine, then contributing editor for Details and Vanity Fair. He has also been creative eye behind advertising campaigns for brands including DKNY, Perry Ellis, Kenneth Cole, Sean John, Banana Republic, H&M, Estee Lauder, M.A.C. Cosmetics, Chanel, Coty and others.

Additional information for “All On The Line” is available on their official website.

Sundance Channel is the destination for What’s Next, Now. Showcasing both today’s creative icons and the emerging talent of tomorrow, Sundance
Channel tells credible, authentic and emotionally immersive stories of invention, fashion, film, travel, design and enterprise. The network’s originals include the social media phenomenon Girls Who Like Boys Who Like Boys and All on the Line starring Joe Zee. Launched in 1996, the network provides perspectives dedicated to founder Robert Redford’s mission to celebrate creativity. Sundance Channel was acquired by AMC Networks (formerly Rainbow Media Holdings) in 2008.