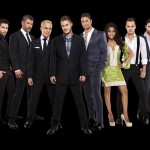 Season 1 of Logo TV's "The A-List: New York" proved that there was more to this reality show concept than a gay knock-off to the "Real Housewives of Atlanta" franchise...with balls. Season 2 entered like a lioness with the addition of Nyasha Zimucha who brought the on-camera volatility amongst the cast to a whole new level.  We could've closed our eyes, spun around, and pinned … END_OF_DOCUMENT_TOKEN_TO_BE_REPLACED