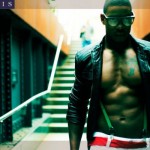 Leroy Garrett, aka "Roylee" or "Lee" or "Roy,"  became one of the most memorable cast members from "The Real World: Las Vegas," season 26 (RW Vegas), with his what-you-see-is-what-you-get persona on and off camera, fight with Adam Royer, friends with benefits relationship with fellow cast member Naomi Defensor, and most notably his unlikely bromance with Mike Ross aka "Mike … END_OF_DOCUMENT_TOKEN_TO_BE_REPLACED

We got to know Frankie Lons when watching the BET reality show "Keyshia Cole: The Way it Is," then on the spin-off reality series "Frankie and Neffe," and then battling sobriety on season 4 of VH1's "Celebrity Rehab with Dr. Drew."  Since that time, there have been reports of her being arrested, dating known drug abuser Slick 'Em from Pretty Ricky, and having had her own drug … END_OF_DOCUMENT_TOKEN_TO_BE_REPLACED