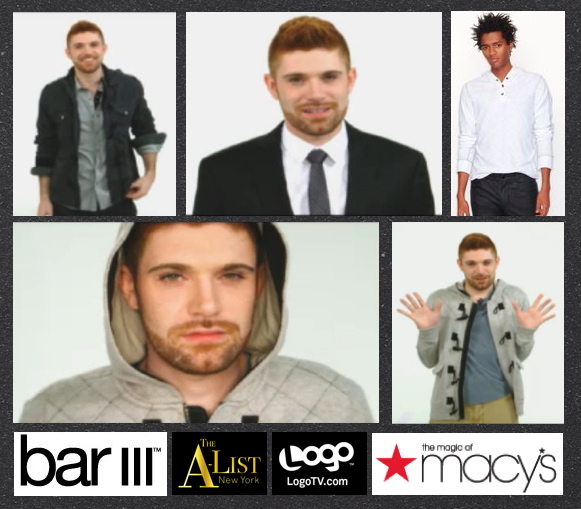 Macy’s, one of the sponsors for Logo TV‘s “The A-List: New York,” pulled in cast member TJ Kelly (Facebook, Twitter, Tumblr) for the Bar III men’s collection viral ad campaign.  TJ injects his colorful commentary while exploring different Bar III looks in the context of “The A-List: New York.”  I spoke to TJ to get his thoughts about the ad campaign and to get a little insight regarding “The A-List: New York” season 2 reunion show hosted by Wendy Williams…how YOU doin? 😀   I’ll get to the reunion after the jump.  Here’s what TJ had to say about his involvement with the ad campaign:

I was really flattered when [Macy’s] came and specifically asked for me to do it, and I think it came out really really cute!…[The shoot] was actually fun.  I worked with someone from Logo, Adam Abernathy, who’s really amazing, and they sent over a bunch of pieces.  It was kind of surreal…filming this commercial and throwing hangers up in the air…I hope I get to do more projects like that with Macy’s in the future. ~TJ Kelly from The A-List: New York

You can definitely anticipate some arguments.  There is definitely some fighting, and I think that some things that seem like they might’ve seemed like they were cleared up definitely got rehashed…I think there’s a little resentfulness amongst the cast.  It was actually a little bit awkward at the beginning because not all of us are talking, and there’s fights that people don’t see go on off-camera as well as on-camera.  I think the end result, though, will end up being quite dramatic… ~TJ Kelly

The two-hour “The A-List: New York” reunion special will air in two parts — part one premieres Monday, October 10th at 10 PM/9C and part two will premiere one week later on October 17th at 10 PM/9C.

Have a burning question for the A-List cast? Make your voice heard! Submit your questions to Wendy via e-mail at AlistLogo@gmail.com or on Facebook at “The A-List: New York.” She will be picking her favorites to answer on-air. (source: Radio and Television Business Report)

TJ on the new A-List: Dallas…

We’re 2 completely different shows.  I think we’re both going to be amazing.  I actually know a lot of the Dallas people; I tweet with them.  I enjoy them so much, and I’m wishing them success because if they’re successful it just means that the brand and what we’re doing is working, and people are liking it or they’re loving to hate it, and either way they’re watching. ~TJ Kelly

Bar III launched exclusively in Macy’s stores and on macys.com in February 2011 with contemporary women’s and men’s clothing collections as part of the retailer’s “Impulse” department. Featuring design that is versatile and fashion-forward, the brand speaks to a young, style-savvy customer looking for distinctive pieces that can be mixed with a high/low wardrobe ranging from denim to designer apparel. (source: MarketWatch)

Read all of my blog posts about “The A-List: New York” – CLICK HERE.