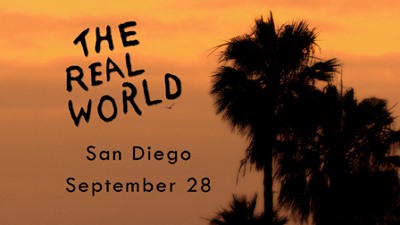 What can I say?  Despite the fact the this season’s MTV Real World cast photographs like a bunch of J. Crew models, I’ve been watching every season from the days when the show felt more “real” through its successful evolution to typecasting.  Here’s the press release introducing this season’s cast.  ~Ifelicious

New York, NY – September 15, 2011 – MTV brings sun, surf, and sexy roommates to viewers this season when “The Real World: San Diego” premieres on Wednesday, September 28 at 10pm et/pt. An endless summer of bikinis, bromances, and hookups await the seven strangers stepping into the pacific palace they will call home. The diverse group includes two brainy students of engineering, two members of the LGBT community, a pair of gorgeous gym rats, and a San Diego native who, despite being the youngest in the house, just may be able to teach her roommates a thing or two. At times, the fun for these seven strangers may seem as endless as the Pacific horizon in front of them. But though the locale may be sun-soaked and beachy, there are storms brewing and it all could come to a crashing halt as personalities collide and tempers flare.

“The Real World: San Diego” is a three-month journey inside the lives of Ashley, Alexandra, Frank, Nate, Priscilla, Sam, and Zach as they experience the opportunity of a lifetime while getting to know, not only each other, but themselves as well. Living in the breathtaking, seaside community of La Jolla, the roommates will learn to navigate the rocky waters, both in and outside the house. Surfs up!

Viewers can head over to “The Real World: San Diego” for cast photos, full episodes, sneak peeks, and exclusive interviews with the cast.

“With beautiful beaches and a laid back lifestyle, San Diego is the perfect backdrop to the 26th season of The Real World. But like always it’s the lives, loves and drama of the seven cast members that will make the season memorable,” said Jonathan Murray, Chairman of Bunim/Murray Productions and Executive Producer of “The Real World.”

At 24-years-old, Ashley has never lived with anyone but her mother—so rooming with six strangers may take some getting used to. Though she will be the oldest in the house, she is the baby at home, getting calls from her mother twenty times a day and still not knowing how to do laundry. But washer-dryer issues aside, Ashley is ambitious and has dreams of getting out of her small Connecticut hometown. A recent business marketing graduate of UCONN, the blonde-haired beauty has worked as a promotional model and bartender, but sports is her first love and she hopes one day to do sideline reporting for the NFL. She likes her men big, tall, and athletic—and though she doesn’t date much, when she decides someone is up to her standards, she goes for them 100%. So Zach, 6’3″ professional football player—get ready.

Raised in a village in Zimbabwe with no electricity or running water, Alexandra is—without a doubt—the most accomplished person to ever appear on The Real World. She was the first woman of color and the youngest person ever to compete on the Zimbabwean National Gymnastics Team. After witnessing many of her childhood classmates contract HIV from vaccinations using dirty needles, she started the Kijana Project, a charity that supports AIDS orphans. As a result, she was featured in Teen People as “One of the 20 Teens Who Will Change the World.” If that weren’t enough, she graduated high school early and enrolled in Stanford at the age of 15, majoring in Civil Engineering. Angering her incredibly academics-oriented parents, Alexandra dropped out of Stanford eight weeks shy of graduation to focus on her burgeoning singing and songwriting career. The striking beauty now lives in Los Angeles, with her musician boyfriend Byron of 8 months. Will their relationship withstand the test of time and distance about to be put in front of them, or will they be torn apart like so many long-distance relationships in seasons past? The sun and sand of San Diego awaits…

Nicknamed Hurricane Frank, this recent graduate of prestigious Middlebury College is a whirlwind of emotions. When he’s up, he is soaring and when he is down, watch out. Growing up in upstate New York, Frank was a star athlete and the smartest kid in class. This trajectory continued in college, but all of a sudden he quit sports, changed from pre-med to focus on activism and social issues, and on his infamous 21sth birthday, hooked up with a guy. What followed was a year of sex with multiple sex partners, both “chicks and dudes”. Frank believes that a night without blacking out is not enough fun. And yet, this master of manipulation wears his heart on his sleeve and is brimming with emotions—perhaps too much. Will Frank find himself in San Diego or will he continue to keep shifting, keep moving, and keep whirling?

At just 19 years old, Priscilla is the youngest member of the Real World house. But don’t let her youth fool you—this Mexican beauty is deeper than she first appears. After graduating high school a year early, she is now on a pre-med track and plans on becoming an anesthesiologist. A San Diego native, Priscilla’s large family is only a short car ride away. Her grandparents—who arrived in America as illegal immigrants, and eventually became millionaires—paid for her fake breasts. And she has an unusually close relationship with her mother, who had her as a teenager. The two discuss everything, including sexual positions and the time they schemed the best tactic for Priscilla to seduce a young man and take his virginity. Despite her flirtatious nature, Priscilla has only been in one serious relationship—one that ended badly and was left unresolved. But with her old boyfriend in town for the summer, will the sun of San Diego fan the flames of a fling forgotten? And will Priscilla’s relative youth and innocence cause a rift between her and the older roommates?

At first, Nate may seem like your typical fratboy—he drinks heavily and parties hard, has bedded 50 women and counting, and growing up was always the class clown. But this Kansas City native has earned a degree in nuclear engineering and has long term goals of becoming CEO of a global energy conglomerate. Nate considers being a “womanizer” to be his best and worst trait—he has never been faithful to any girlfriend; after breaking up with one girlfriend he immediately hooked up with her best friend. Nevertheless, Nate is an incredibly loyal and caring friend. He was always a popular kid—captain of the high school football and baseball teams, president of his senior class, but this all changed when one of his friends committed suicide. Suicide Prevention has since become an issue near and dear to Nate’s heart and he continues to be an advocate while in San Diego.

Sam is a self-described “Stud Lesbian”. Known as a girlfriend stealer, Sam was involved in a dramatic love triangle in high school that ended in two girls being outed. The daughter of military parents, Sam lives at home in Chesapeake, Virginia, and is in college studying to become a parole officer. Her relationship with her mother was strained over her sexuality when she first told her, but over time the relationship has improved. Sam is passionate about gay rights and has recently made a splash in the lesbian community by performing as Shawn Jade, her drag king alter ego. With a house full of bikini-clad beauties in San Diego, will any of the girls catch her eye?

Towering at 6’3″, Zach has the build of a professional football player and that’s a good thing, seeing that he plays arena football. And yet, at 23, Zach’s dreams of reaching the NFL may have passed him by. After graduating from Northern Michigan University with a degree in sports science and exercise physiology, Zach supplements his semi-pro football gig with a job at a physical therapy clinic. It’s not all work though, Zach likes to spend time with his two best friends—the trio call themselves “The Goon Squad.” They compete to get girls while doing such colorful activities as cougar hunting. Zach does attract young babes as well and he certainly knows how to use his dreamy, good looks to his advantage. Will any of the girls in San Diego fall hard for this reserved, conservative guy who loves steaks, country music, and shooting guns? And how will Zach’s small-town values clash with his more progressive roommates?

MTV is the world’s premier youth entertainment brand. With a global reach of more than a half-billion households, MTV is the cultural home of the millennial generation, music fans and artists, and a pioneer in creating innovative programming for young people. MTV reflects and creates pop culture with its Emmy(R), Grammy(R) and Peabody(R) award-winning content built around compelling storytelling, music discovery and activism across TV, online and mobile. MTV’s sibling networks MTV2 and mtvU each deliver unparalleled customized content for young males, music fans and college students, and its online hub MTV.com is the leading destination for music, news and pop culture. MTV is part of MTV Networks, a unit of Viacom (NYSE: VIA, VIA.B), one of the world’s leading creators of programming and content across all media platforms.

Bunim/Murray Productions is the leading producer of innovative entertainment content. The Emmy Award-winning company is widely credited with creating the reality television genre with its hit series The Real World (26 seasons for MTV). Bunim/Murray continued to innovate with the first reality game show, Road Rules (MTV), in 1995; the first reality sitcom, The Simple Life (E!), in 2003; and the first reality soap opera, Starting Over, in 2003. Bunim/Murray’s current programming includes The Bad Girls Club and Love Games (Oxygen), Keeping up with the Kardashians, Kourtney and Khloe Take Miami, Kim and Kourtney Take New York and Khloe and Lamar (E!), The Real World/Road Rules Challenge (MTV) and Project Runway and Project Runway All Stars (Lifetime). Bunim/Murray Productions has launched additional entities including M Theory Entertainment, BMP Films and M Music. BMP Films produced Pedro (MTV) and the Emmy Award-winning Autism: The Musical (HBO). Based in Van Nuys, CA, Bunim/Murray Productions was founded in 1987 by Jonathan Murray and the late Mary-Ellis Bunim. The company joined Banijay Group in 2010.

READ all of my blog posts about the Real World seasons – CLICK HERE.