You are here: Home / ifelicious tv / In The Life / Sep 2011: IN THE LIFE episode “Changing the Game” about homophobia in sports

There are currently no out major league athletes in the United States. IN THE LIFE goes inside the aggressive, homophobic world of sports with “Bam Bam” Meulens of the SF Giants, Former NY Giants Running Back Tiki Barber, Rugby Star Ben Cohen, college wrestling champ Hudson Taylor, and more in this month’s IN THE LIFE episode “Changing the Game” premiering on ITLMedia.org and airing on public television stations across the country.

When a professional athlete like Kobe Bryant screams the “F” word at a referee or the Atlanta Braves coach yells homophobic slurs at San Francisco Giants fans there is a message that homophobia in sports is okay, but the tide is turning as more teams and athletes take a public stance supporting the LGBT community. Featuring the pioneering work of GLSEN’s Pat Griffin, out college athletes, and the Fearless exhibit, IN THE LIFE documents the concerted effort to end homophobia in sports.

“I always hearken it back to the Jackie Robinson era. Think about a time when African Americans weren’t allowed to play sports simply because of the color of their skin. Think about the contributions that were missed then that are now capitalized on. It’s the same thing with sexual orientation as it was with skin color. It doesn’t matter. You’re either a great athlete or you’re not.” Tiki Barber, Former Running Back, NY Giants.

“Changing the Game” concludes with a profile of a college bound youth, Kadeem Swenson, who experienced homelessness and developed leadership skills with support from the organization Campus Pride.

“On a college level, things just don’t get better. We have to pick the right college. 23% of LGB, lesbian, gay and bi identified students, faculty, and staff are harassed on campuses. A third of transgender students, faculty, and staff fear for their physical safety. I mean this is 2011,” Shane Windmeyer, Executive Director & Founder, Campus Pride. 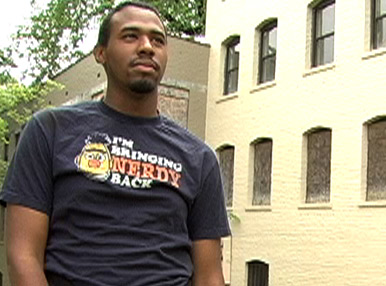 Kadeem Swenson was kicked out of the house after coming out to his parents in high school. With hard work and help from organizations and mentors, Swenson escaped homelessness and is now the first in his family to attend college.

“Changing the Game” is now airing on public television stations across the country and available for free video streaming and downloadable podcasts from the In The Life Media website. To find out when it will air in your local area, to stream or download it, go to ITLMedia.org.