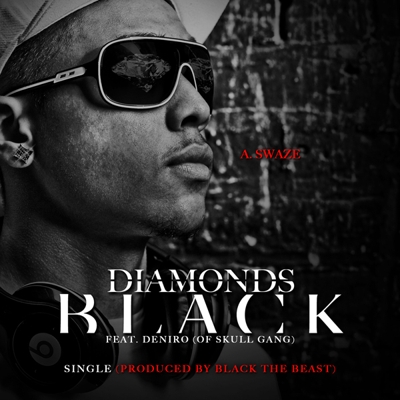 (NEW YORK) Monday, August 8, 2011 — While currently working in the studio with Layzie Bone of Bone Thugs-n-Harmony, Ohio’s newest talent to watch, A. Swaze, has released his much anticipated video for his “Diamonds Black” single.

Hailing from the Midwest, A. Swaze follows the lead of Wiz Khalifah, Big Sean, Stalley, Kid Cudi and two of the largest named artists, Kanye and Eminem who have found success upon growing up in the Midwest. With his new video for “Diamonds Black,” Swaze has the potential to become the new face to watch.

A. Swaze’s “Diamonds Black” is produced by Black The Beast, who burst on the scene as a talented producer with dance hit “Aunt Jackie,” and followed it up with Diggy Simmons‘ hit “Great Expectations.” Swaze has an A team that he is working with including Layzie Bone. The Ohio natives have come together and have been in the studio working with Swaze on his debut mixtape. With a solid, supportive and talented team, the Midwest is sure to hit another home run with great talent!

Watch A. Swaze’s debut video for “Diamonds Black” produced by Black The Beast