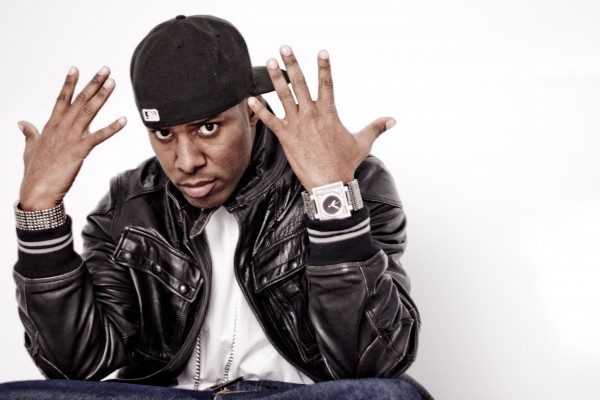 Whoo Kid.  Not just a DJ, he’s a lifestyle.  He explained in my interview with him:

“There’s so many artists out there, but you don’t know who their DJs are.  Who the fuck are their DJs?  It’s business. It’s combining situations of personality, how you dress, who you fuck with, do girls like you, the music you choose, production.  There’s like 20 things.”

Whoo Kid embodies the new era of celebrites who started out as DJs and then grew into something bigger.  For Whoo Kid that includes being one of G-Unit‘s official DJs, CEO of Shadyville Entertainment, creator of RadioPlanet.tv, Host of “G-Unit Saturdays”- a weekly radio show on SiriusXM‘s Shade 45, part owner of KRSP clothing line, music producer…and professional shit talker.

With many years as a radio host, Whoo Kid’s not one who’s often in the hot seat, so I was excited to flip the mic back in his direction for a few minutes.  What I uncovered was a glimpse of who’s Whoo Kid and how he’s become so successful in his career.

Ifelicious:  With all of the travel for DJ gigs, appearances, and your weekly show in SiriusXM, how do you keep your energy level up?

WhooKid:  I guess I got a job at radio that I like doing. It’s come to a point where I don’t even feel like it’s a job anymore.  It’s like second nature.  Even when I’m on radio, I’m naturally a dickhead anyway…and every interview is like the anti-interview anyway. You got Hollywood cats that just keep coming back because they just never witnessed any kind of hit show like this.  Fans just keep coming back every week, Hollywood dudes, rappers, and comedians…I don’t consider myself a comedian.  Comedians, like they think I’m ill…Dave Chapelle thinks I’m a funny dude.

Ifelicious:  It seems like satellite radio has really changed the radio game.  What’s it done for you in your career?  Like you can say anything and just be yourself.

Whoo Kid:  As long as you don’t abuse it.  What’s cool is you can really say anything but it allows me to be emotional when you need to be emotional…You can just say stuff like, ‘I’m completely pissed off’ or ‘Get the fuck outta here’…on FM radio you’ve got to watch what you say.  You can’t be yourself.  Everything’s pre-recorded.  When you’re doing interviews, you got to record it, then edit it, then put it out, so it was like so artificial…That’s some bullshit ‘cause it’s like they wanted me to play Britney Spears, mixed with Prodigy and DMX and I was like, ‘Huh?’ I could understand they had problems with the advertisers and all that bullshit…and I was only getting like a $170 a week compared to my big salary [with Shade 45].  Eminem called and asked do you want to work at my station, you can be both the DJ, the host, and program director.  Who’s going to say no to that?  And it was in the beginning where nobody believed in satellite.  I’ve been there 6, 7 years so I became like the king of that shit.  There’s other shows that’s good, but my show is more Hollywood style, more funny, new music. It’s kind of weird to do an interview with Denise Richards and then you two going into a Styles P and Mobb Deep record.  It’s kinda weird, but I molded it where everybody’s happy.  You can be a 40 year old lady coming in listening to like Danny Aiello and then you could be a young kid tuning in to the new music after me and Danny Aiello is finished talking…I always make the interviews funny so the new kids can come in and laugh and learn about who the fuck is Danny Aiello.  So you gotta kinda of balance all that.  Some people, they don’t want a lot of talk, they want to hear music…They hate reruns.  I try to do like reruns because I gotta go away.  I get cursed out on Twitter like I wasn’t supposed to have a day off.  My show is a 10 hour show.

Ifelicious:  That’s what I was saying.  How do you keep that energy up?  That’s a lot of talkin’.

WhooKid:  I only work one day a week, Saturday and that’s it.  My show’s from 10am to 5pm and then the Gomez Brothers come on.  It goes so fast because there’s so much shit going on.  It’s funny.  People are laughing.  It’s a party up there.

Ifelicious:  Who’s the most interesting celebrity you interviewed recently?

Ifelicious:  Sometimes, you can go there, but it doesn’t always mean the person you’re interviewing is going to go there with you.  I’m surprised because [Quincy Jones] didn’t strike me is someone that you could get to be that comfortable.  Good for you!

Whoo Kid:  The interview was so cool…the vibe was cool.  The fans were calling.  The music was crazy.  A lot of dumb DJs that be on radio, they don’t know to do research on these artists, and me being in radio for 20 years, I got songs that they probably never heard of that they produced.  They just be shocked.  Like Swizz Beatz be like, ‘Where’d the fuck you get that from?’

Ifelicious:  Who’s some of your biggest competition?  Let’s say worldwide since you’re all over the place.

Whoo Kid:  I don’t really look at that competitive bullshit because I’m more worried about doing me and the next cities I gotta go to and come back, do this mixtape for this artist overseas and then work with 50, go on tour…I stay one hundred.  Everything I do is a hundred miles away from whatever they’re doing.  If they get this artist, I’ll just go get Tiger Woods or this guy does this, I’ll just get Michael Jordan to hang out…When you’re overseas, people know me from 10 different things- I DJed with 50, or they heard me on the radio, or I did a mixtape with one of their artists from their country.

Whoo Kid:  If you missed my show you can watch all the interviews on there all week and they’re all edited and all funny stuff.

Ifelicious:  Did you have a vision for it when you launched it?

Whoo Kid:   I was going to do a magazine but then I didn’t do the magazine because Quincy Jones was like all these magazines were like suffering, and I’m really cool with XXL.  They’re still like the number one hip hop mag but they still gotta go through a lot of bullshit especially with all that technology.  Why would I start a magazine when information is so instant?  So I was like I might as well just get everything, get my interviews ASAP put it up and then now I make money off of the ads off the site.  So RadioPlanet was really supposed to be my “POW! Magazine” that I started and only did like one issue…I saw the success of ThisIs50.com that’s why I gave 50 Cent 20 percent of RadioPlanet and made him a partner.

Ifelicious:  So who are you seeing?  Are you an international playa or what?

Whoo Kid:  I can’t take any of that stuff serious because the first thing is my business because without that you ain’t gonna have any of that extra stuff.  To do this game you gotta sacrifice a lot of stuff.  It’s never what you think it is.

Ifelicious:  So you’re gonna tell me that all day you’ve been studying and working in the industry.

Whoo Kid:  Mm-hmm…I get my dick sucked every now and then but I’m just letting you know that business is number one.

Ifelicious:  I see you have Haitian roots.  Do you have any family or friends that were affected by the earthquake?

Whoo Kid: Surprisingly, nobody died I mean I know a lot of friends that their friends died but what’s fucked up this year is that my kids are half Japanese too.  I got kind of like choked up with like Japan and Haiti getting fucked up by tsunamis and earthquakes.  It’s like a never ending fuckin torture chamber, but it’s all good.  Japanese people and Haitians always prevail.

Ifelicious:  What projects do you have going on right now?

Whoo Kid:  I’m working with [Lloyd] Banks right now, a new mixtape.  I’m working with this big artist called Tinie Tempah from the UK.  His mixtape is almost done.  It kind of opened the doorways for a lot of UK artists…Other than that, I’m promoting my KRSP clothing line.  I’m a [one] third partner in the company. Everybody’s buying it- from Wiz Khalifa to Bruce Willis…We kept it Hollywood…we kept it so like any cool kid could rock it.  It’s just growing, and my RadioPlanet is in its second year that it’s been running.  I’m just like taking everything in stride.

Ifelicious:  When all is said and done and the good Lord calls you home, how do you want to be remembered?

Whoo Kid:  The dickhead that was on the radio that worked for Eminem, worked with 50, and had a cool clothing line.

Other interviews with Whoo Kid…

Whoo Kid has had a lot of press coverage from the UK lately as you’ll see in the video clips and articles linked below.

VIDEO: RWD TV interview with Whoo Kid
(I like this one because you find out the story behind how Whoo Kid got his name)