You are here: Home / Beauty/Fashion / Lady Gaga’s meat dress moves from the meat locker to the museum 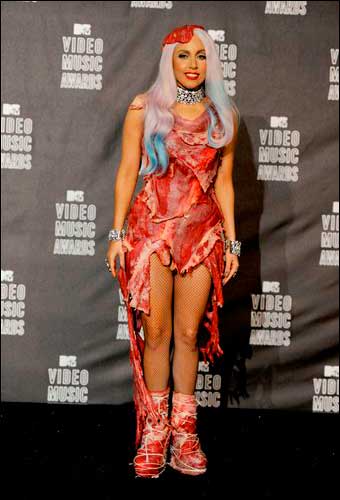 (Press Release) The Rock and Roll Hall of Fame and Museum will exhibit the hand-sewn meat dress Lady Gaga wore to the 2010 MTV Video Music Awards as part of its recently unveiled Women Who Rock: Vision, Passion, Power exhibit on Thursday, June 16, 2011 beginning at 10 a.m.

Lady Gaga wore her famous Meat Dress onstage during her acceptance for Best Video of the Year for “Bad Romance” at the MTV Video Music Awards on September 12, 2010. The raw-meat dress was created in collaboration between designer Franc Fernandez and designer Nichola Formichetti and received simultaneous criticism and praise from the media and the public. Lady Gaga explained her symbolic decision to wear the dress to Ellen DeGeneres: “Well, it is certainly no disrespect to anyone that is vegan or vegetarian. As you know, I am the most judgment-free human being on the earth. However, it has many interpretations for me this evening. If we don’t stand up for what we believe in and if we don’t fight for our rights, pretty soon we’re going to have as much rights as the meat on our own bones. And, I am not a piece of meat.” Time magazine later called the dress the Best Fashion Statement of 2010.

Lady Gaga was born Stefani Joanne Angelina Germanotta on March 28, 1986, in New York City. She began performing on New York City’s Lower East Side in 2003 and enrolled at New York University’s Tisch School of the Arts. She soon signed with Streamline Records, an imprint of Interscope Records. She worked as a songwriter for fellow label artists and captured the attention of the rap artist Akon, who recognized her vocal abilities and signed her to his own label, Kon Live Distribution.

Gaga came to prominence following the release of her debut studio album, “The Fame,” in 2008. The album reached Number One in six countries, peaked at Number Two in the U.S. and spawned two hit singles, “Just Dance” and “Poker Face.” Her followup EP, “The Fame Monster,” came out the following year and also produced two hits, “Bad Romance” and “Telephone.” She then embarked on a second global headlining concert tour, the Monster Ball tour, just months after having finished her first, the Fame Ball tour. Lady Gaga’s second studio album, Born This Way, came out in May 2011.

In her short career, Lady Gaga has garnered numerous awards, including two Grammys and eight MTV Video Music Awards. She has sold more than 15 million albums and 51 million singles worldwide. Billboard magazine named her Artist of the Year in 2010. She has also been included on Time magazine’s list of the most influential people in the world and on Forbes magazine’s list of the 100 most powerful and influential celebrities in the world. Forbes also placed her at number seven on their annual list of the world’s 100 most powerful women.

The Rock and Roll Hall of Fame and Museum has opened a groundbreaking and provocative new exhibit that illustrates the important roles women have played in rock and roll, from its inception through today. Women Who Rock: Vision, Passion, Power highlights the flashpoints, the firsts, the best, the celebrated — and sometimes lesser-known women — who moved rock and roll music and American culture forward.

The interactive exhibition spotlights more than 70 artists and fills two entire floors of the museum. The exhibit features artifacts, video and listening stations, as well as a recording booth where visitors can film a short story or moment of inspiration related to women in rock. The exhibit moves through the rock and roll eras, weaving a powerful and engaging narrative that demonstrates how women have been the engines of creation and change in popular music, from the early years of the 20th century to the present. Women Who Rock is sponsored by PNC, Time Warner Cable and Biography. Women Who Rock is open until February 2012. For more information, visit http://rockhall3-px.rtrk.com/exhibits/women-who-rock.

In addition to the Meat Dress, the Rock and Roll Hall of Fame’s Women Who Rock exhibit includes the following collection items from Lady Gaga:

Lady Gaga’s paternal grandparents bought this piano in 1966 for $780. When Gaga was not even a year old, her grandparents gave the piano to her parents. According to Gaga’s mother, “When Stefani started to crawl, she would use the leg of the piano to pull herself up and stand, and in doing so, her fingers would eventually land on the keys.  She would stay there and just keep pressing the keys to hear the sound.  We would then start to hold her up or sit on the bench and let her tinker, you know, things like ‘Chopsticks’ and ‘Mary Had a Little Lamb.’” Gaga began taking piano lessons when she was four. She wrote her first song when she was five. It was called “Dollar Bills” and was inspired by Pink Floyd’s “Money.” She continued to play this piano until her parents bought her a baby-grand piano for her 13th birthday.

Lady Gaga wore this outfit at the 2010 Grammy Awards. Her song “Poker Face” won the Grammy for Best Dance Recording, and her album The Fame won for Best Electronic/Dance Album.

About the Rock and Roll Hall of Fame and Museum

The Rock and Roll Hall of Fame and Museum, Inc. is the nonprofit organization that exists to educate visitors, fans and scholars from around the world about the history and continuing significance of rock and roll music. It carries out this mission through its operation of a world-class museum that collects, preserves, exhibits and interprets this art form and through its library and archives as well as its educational programs.

The Museum is open seven days a week from 10 a.m. to 5:30 p.m. On Wednesdays (and Saturdays through Labor Day), the Museum is open until 9 p.m. Museum admission is $22 for adults, $18 for adult residents of Greater Cleveland, $17 for seniors (65+), $13 for youth (9-12), children under 8 and Museum Members are always free, for information or to join the membership program call 216. 515.8425. For general inquiries, please call 888.691.0667 or visit rockhall4-px.rtrk.com.  The Museum is generously funded by Cuyahoga County residents through Cuyahoga Arts and Culture.