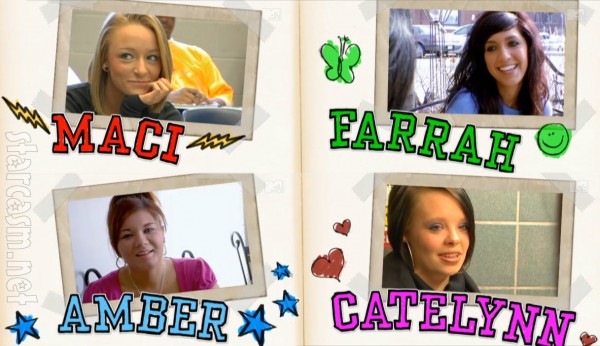 The girls originally featured on MTV’s “16 and Pregnant” followed by the the first season of “Teen Mom” Farrah Abraham, Maci Bookout, Amber Portwood, and Catelynn Lowell are back on July 5, 2011 for “Teen Mom 3.”  MTV announced the news in alignment with the National Day to Prevent Teen Pregnancy back on May 4, 2011.   I have a particular affinity to this group of gals over any other from the Teen Mom series and have followed them on the show and in the tabloids.  Now that these gals, who would otherwise be unknown, have juggled young motherhood, choosing adoption, relationships, court battles, and fame, it’ll be interesting to see if MTV has truly done a service to these teens.  We can also look forward to a series of Public Service Announcements from the young moms via the It’s Your Sex Life campaign where they’ll speak about teenage pregnancy and prevention.  There are several already uploaded on the Teen Mom 3 homepage.

Here are some updates since “Teen Mom” aired with this cast:

Also, here’s one of the PSAs:

Read all of my Teen Mom blog posts- CLICK HERE.