You are here: Home / ifelicious tv / The Sundance Channel and ELLE’s Joe Zee hit a home run with series “All on the Line” 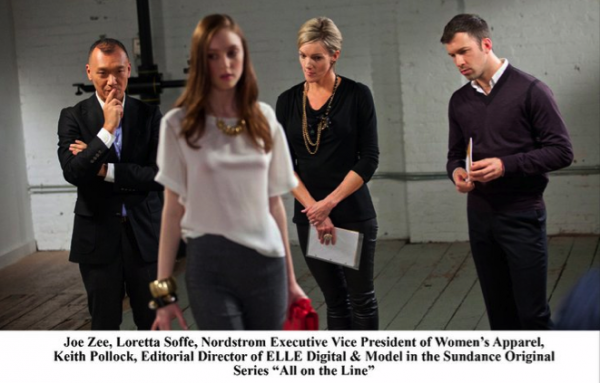 Each episode of “All on the Line” begins with the following monologue from Joe Zee:

I’m Joe Zee, and I’m the creative director of Elle Magazine.  I have over 20 years of experience in the fashion industry.  I’m at a point in my career where I want to use my experience to help struggling designers make their dreams come true.  Each week, I will hand pick one talented designer who has hit a roadblock on the way to success…and I will use all of my resources and power to help them turn their business around…It’s all on the line.

I wish there was a Joe Zee for bloggers/freelance writers like me because I would totally seize the opportunity.  I was introduced to Joe through MTV‘s “The City,” a spin-off from “The Hills.”  While Joe was very visible on the show, we saw more of his refereeing/mediation skills than his fashion sense while managing arch rivals- socialite turned accessories editor then Elle.com reporter Olivia Palermo and ELLE PR director Erin Kaplan.  With that introduction to Joe, I was a little hesitant to check out “All on the Line,” but after watching one episode I was not only hooked but inspired.  I admire Joe’s ability to deliver criticism very directly while still having compassion as he sincerely has the designer’s best interest in mind.

Many fashion designers who aren’t selling their collections need to take  a painful step back to the basics:  clearly define their customer, create ready to wear looks for that customer that still reflect the designers aesthetic (a word you’ll hear a lot on the show), keep the price point accessible to a broad consumer base, and find buyers for your collection.  These business concepts translate to any profession, and that’s what drew me in with a notepad each week as I took a more critical look at my own career as a writer.

Unlike scripted reality television, “All on the Line” doesn’t always have a happy ending.  There are designers that are completely resistant to change, despite Joe’s advice and willingness to put his reputation on the line (another phrase you hear often).  Intermittently, you’ll also hear from Keith Pollock, editorial director for ELLE.com who’s generally not as optimistic as Joe but is keeping a close eye out for a potential feature on ELLE.com.  Ultimately, those who do fail are for the very reasons Joe pointed out, reiterated, and argued throughout the episode.  It’ll have you jumping off your couch yelling at designers that sometimes just don’t get it or are so married to their current process that starting from scratch at times is inconceivable.

At the same time, there are some success stories where designers have made the needed shift in creative direction who wow buyers that select pieces for their store/franchise.  For example, pay particular attention to the episodes with Gemma Khang and Layla L’Obatti (Between the Sheets) who have very different outcomes.

Over the weekend, I tweeted about the marathon for “All on the Line” that was running and it was retweeted from Joe Zee (twitter: @MrJoeZee) which totally made my day.  I followed it up by sharing how I think this show is the best fashion based reality television show out there, and he replied again thanking me.  Aside from the smiles it brought me from that brief online encounter with Joe, I’m sharing that to say, it seems that Joe keeps his eye on the pulse and power of social media as well which is critical to any business these days.  I have to thank him because those 2 tweets from him landed me several new fashion related followers including Leila Shams who was designer featured on the show.  I’m hoping to feature her right here on Ifelicious Thoughts sometime soon, and from reading Tom & Lorenzo’s blog post “All on the Line with Joe Zee of Elle,” maybe I do have a shot at getting to interview with the Joe Zee who is a person I aspire to be- best in class, tell it like it is,  remembers his roots, has compassion for others, gives back, and encourages others to dream big while staying grounded in reality.

Watch season 1 re-airing on the Sundance Channel Tuesdays at 10:00 PM, and stay tuned for season 2!