You are here: Home / ifelicious music / 15 year old rock artist Jack Skuller has a sleeper hit with “Love is a Drum” 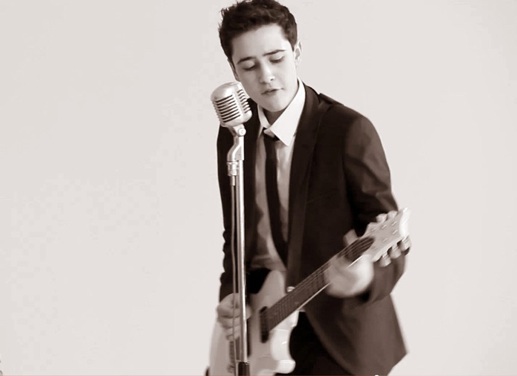 15 year old Jersey native Jack Skuller is inching his way into the rock/pop scene. His first single “Love is a Drum” released on April 20, 2011 through indie label Bar/None Records and produced by Daniel Rey. Producer Daniel Rey has worked with noteworthy artists such as the Ramones, Ronnie Spector, and the Misfits.  No less impressive was that the song was written by Jack when he was only 11 years old.  The video, shot in black and white is reminiscent of performances seen on The Dick Clark Show in the 1950s.

> CONTINUE READING >>” />My first impression of “Love is a Drum” was me likey!  It kind of has that Beatles rock/pop vibe, the lyrics are timeless (i.e. applicable at any age…what was he thinking about at age 11? LOL), his vocals are well suited to the song, and the guitar/drum set combo give that classic garage band sound we enjoy every year at festivals nationwide.  The video is cleverly adapted starting out with images of different presumed young fans followed by Jack and 15 year old drummer Rex Detiger‘s entrance to virtually barren stage set and the song begins.  The fact that “Love is a Drum” was shot in black and white adds to the vintage feel.

VIDEO: “Love is a Drum” by Jack Skuller
(The single can be ordered through Bar/None Records, iTunes, Amazon, and eMusic.)

On May 17, 2011, Jack released another love song entitled “Second Hand Smoke” also produced by Daniel Rey.  In the song, he uses second hand smoke as a metaphor for rebound love.

We all know how important that second single is to winning over a fan base.  Willow Smith had us all with “Whip My Hair” but lost some of us with “21st Century Girl.” My first impression is that it doesn’t sound believable coming from his 14 year old chops.  Love songs are tricky like that.  They really need to factor the age, and the artist has to make us buy into the storyline.  Also, I don’t think the vocals and lyrics are as strong as “Love is a Drum.  Regardless, Jack has the seeds of potential.  The million dollar questions are will he be able to break through a saturated market with Justin Bieber at the helm, and will he voice have the same fresh appeal as he matures?