You are here: Home / ifelicious tv / Logo TV reminds us that in Hollywood “Pretty Hurts” with its new reality series 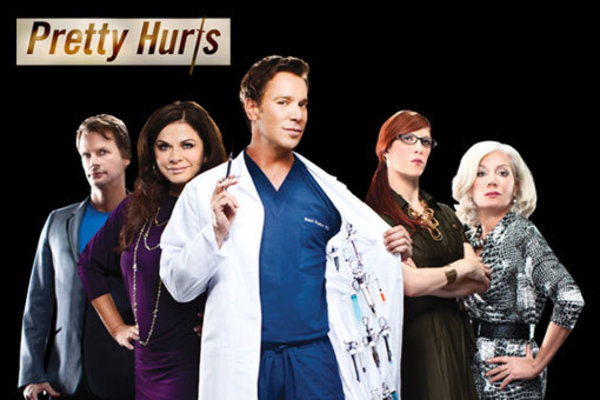 LA is the only place I visit where I feel self conscious…well maybe Miami, too.  With so many wannabe and actual model/actors going on auditions, walking red carpets, trying to be discovered, beauty dictates in LA.  Instead getting on my high horse about America’s standards of beauty, let’s have a little fun courtesy of Logo‘s new reality tv show “Pretty Hurts.”  If you don’t like needles, skip this blog post and read one of my other awesome entries.  😀  “Pretty Hurts” airs on Saturdays at 8:00 PM ET/7:00 Central.  Episodes are also uploaded on the show website or by subscribing via iTunes.

Watch my red carpet INTERVIEW with the cast of “Pretty Hurts” at the 2011 NewNowNext Awards:

“Pretty Hurts” showcases the “Rand” half of Leaf & Rand Medical Skincare Clinic in Beverly Hills.  Rand Rusher, AKA “Beverly Hills Mr. Fix-It,” is a registered nurse who serves as the business’s lead injectionist which offers non-surgical anti-aging procedures.  What the heck does that entail?  As far as I can tell it’s BOTOX® injections, Restylane® fillers, and maybe some laser treatments and chemical peels- stuff like that (see the press release below).  All I can say after watching the show is “ouch!” and  you’ll hear Rand echo the show’s title “pretty hurts” with many of his patients.

The show isn’t like something you’d see on TLC or the Discovery Channel with just the mechanics of anti-aging procedures.  Rather, to spice things up as a reality show it also plays off the office dynamics and their personal lives.  There’s Curt Meeuwsen, the focused “business first” guy, who helps run Rand’s side of the business and also happens to be Rand’s ex beau of 11 years.  With that said, another aspect of the show is Rand’s love life…or lack thereof.  I guess we’ll have to wait to see how things go as the show progresses.  Oh, also there’s the effervescent red head Elizabeth Jacobus– office manager and the straight lady glue to keep it all together (you know we love our gays! 😉 ).  She has an awesome blog where’s she’s been providing deeper look behind the scenes of each episode.  Make sure to go check out elizabethjacobus.blogspot.com.

It’s not a show that I would normally get into, but I think what makes it work is the variety of personalities and celebrities that come in for treatment.  Just in episode 2 there was Raven from RuPaul’s Drag Race, season 2 who arrived in full drag wanting to look like an Olsen twin.  BTW, who wants to look like an Olsen twin on purpose?  Anyhooz, it gets even juicier as sassy former supermodel, diva, and season 4 cast member on VH1’s Celebrity Rehab with Dr. Drew Janice Dickinson comes in wanting to look younger.  Need I say more?

Here’s an excerpt from the show’s press release:

“Plumping,” “freezing,” “smoothing” and the requisite “hurting” are all words near and dear to the clients of Rand Rusher’s exclusive, Beverly Hills skin care clinic. “Pretty Hurts” follows Rusher’s real-life clients in their pursuit of eternal youth and beauty who endure the pricks and pokes of his needles which promise to roll back the hands of time…

…“Pretty Hurts” stars Beverly Hills’ lovable “injector to the stars” Rand Rusher, RN. Throngs of beauty-obsessed Angelenos flock to Rusher for the hippest, non-surgical procedures in an effort to fix the “flaws” that plague them. His client base may be diverse, from world-famous celebrities and international socialites to West Hollywood drag queens, but they all share a common thread: the search for physical perfection. Each episode follows several clients’ in-office procedures including the up-close, cringe-inducing pokes, jabs and stabs guaranteed to get under your skin as well as the often-crazy out-of-office back stories of Rusher and his eccentric network of friends, colleagues and co-workers.

It takes a village to manage the diva-ish demands of the clients. Rushner finds support from his staff: his ex and head-of-staff business manager Curt, laser specialist Joy, office manager Elizabeth and esthetician Maya.