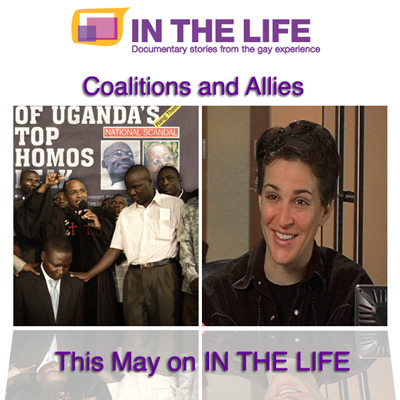 IN THE LIFE features the renewed efforts to educate and raise awareness on the status of the Ugandan bill. Homosexuality is illegal in Uganda. If the bill were to actually become law in Uganda, the consensual conduct would be subjected to life imprisonment with the possibility of the death penalty for certain homosexual acts, or repeat offending acts. All Ugandan’s would be required to report any suspected homosexual to the police within 24 hours. It would criminalize any discussion, any expression, any outreach of gay communities including health related outreach.

“The important thing to remember about what is going on in Uganda is all these right wing fundamentalists in America that have been trying so hard to pass their agenda and persecute us here, they haven’t been able to. So they’re exporting this agenda overseas,” Wayne Besen, Founder and Executive Director, Truth Wins Out.

Highlighting the ties between an elite organization of American conservatives and the legislators behind the bill in Uganda, IN THE LIFE exposes homophobic evangelicals in the United States who support anti-gay rhetoric and violence in Uganda. David Kato, known as the “father of Uganda’s gay rights movement,” was beaten to death in his home. In this episode, IN THE LIFE celebrates Kato’s life and work, and features the stories of gay Ugandan’s risking their lives to speak out against persecution.

“They are using Africa for their own political gain. It’s about time the government of Uganda asked these religious groups, ‘Are you here to preach love or to preach hate?’” Frank Mugisha, Sexual Minorities Uganda.

Also in this episode, Rachel Maddow discusses the work of progressive faith leader Rev. Dr. Welton Gaddy, whose inclusive theology stresses the importance of the separation between religious institutions and the State.

“Coalitions & Allies” will begin airing on May 1st on public television stations across the country and will be available for free video streaming and downloadable podcasts from the In The Life Media website. To find out when it will air in your local area, to stream or download it, go to www.ITLMedia.org.