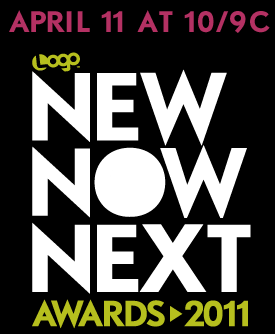 The “NewNowNext Awards” gathers icons and stars-on-the-rise to crown the next “big things” in TV, music, film, print and new media long before they hit the mainstream. Nominees for the “NewNowNext Awards” were chosen by the “NewNowNext Academy” – a mix of tastemakers from TV, film, music, print and new media. The resulting categories spotlight outrageous distinctions such as; “#zOMG Internet Award” and “Cause You’re Hot” along with the more traditional titles of “Brink of Fame Actor/Music Artist” and “Best New Indulgence.” A full list of nominees for the categories along my picks and the actual winners (to be updated after the show airs) can be found on my blog post “Logo announces nominees for the 4th annual NewNowNext Awards 2011, vote now!”

I had the pleasure of attending all of the festivities from the red carpet to the awards show to the official after party at Avalon in Hollywood. Below you will find my coverage from the event.  Also, check out my YouTube channel for my personal vlog about the event as well as the red carpet interviews that are also in this post- youtube.com/ifelicious.

Thanks to Vincent Sandoval Photography for lending a helping hand with red carpet photos. I finally didn’t have to juggle a camera and a video-cam for event coverage.  Check out Vincent’s work on www.vincentsandoval.com and vincentsandoval.etsy.com.  You can also follow him on Twitter (@lovevinnie).

Thank you Logo for letting this midwest gal for continuing to include my blog ifelicious.com for your event coverage.

Other links to event coverage: