I’ve been following Illogic and Ill Poetic since moving to Columbus, Ohio. I have yet to see them put on a bad performance, so I’d definitely recommend checking out this tour with J. Rawls, Illogic, Ill Poetic, and LxE For The Uncool through various Ohio venues and one stop in Pittsburgh, PA. Too bad I’ll miss out on their performance at Skully’s on April 15th with Talib Kweli. I know that show is gonna be super dope-taculous! Peep the deets below. ~Ifelicious 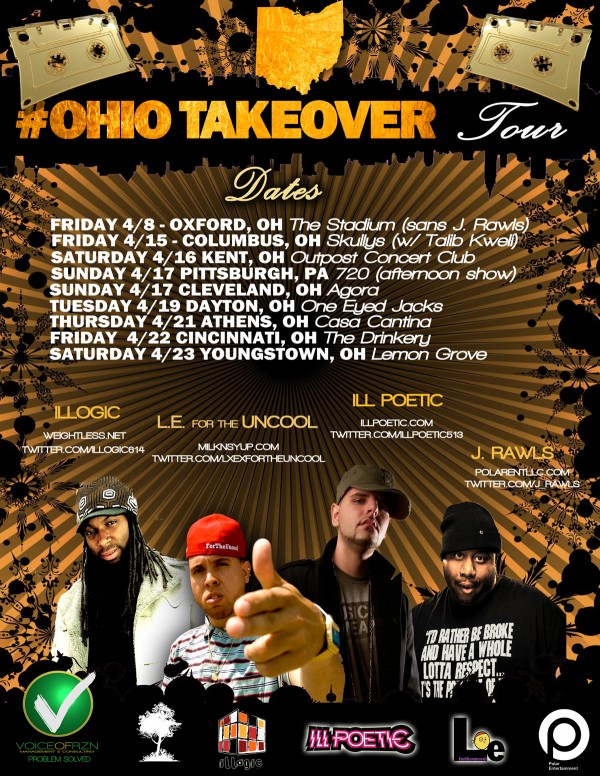 This tour represents nearly four sub-generations of Ohio Hip-Hop artists coming together and sharing our sounds and influence with each other. We want to give the crowds across Ohio an amazing experience that reaches all the way back from the golden era of Ohio music to the new renaissance our scene is beginning to rebuild. – Ill Poetic

(COLUMBUS, OH) March 31, 2011 — Ohio was once known as the epicenter of the national music scene. From the recognizable names (Roger and Zapp, Bootsy Collins, Ohio Players), to the lesser-known legends (Heatwave, SUN, Slave), you couldn’t turn on a radio in the country without hearing Ohio’s influence in music and culture. That time has passed, but generations of Ohio artists have continued to pass the flickering torch to each other, continuing the legacy their parents and grandparents proudly built decades ago; and while its sound has resonated through countless eras of music, Ohio funk is rarely given credit as one of hip-hop’s greatest influences.

On Friday, April 8, 2011 four of the state’s most well-known and respected artists will suit up and hit the highway for an extensive two-week “Ohio Takeover Tour.” Like the generations of musicians before them, this group of artists has built careers based off the influence of their midwest surroundings and ancestries and are now bringing this experience to you. Legendary DJ/Producer J. Rawls (www.polarentllc.com) and veteran emcee Illogic (www.illogicaltrainofthought.blogspot.com, twitter: @illogic614) will be joined by up-and-coming artists Ill Poetic (illpoetic.com, twitter: @illpoetic513) and LxE For The Uncool (milkNsyrup.com, twitter: @LxEfortheuncool) for a nine-city tour through their home state [except the one stop in Pittsburgh, PA], each in support of freshly released albums and upcoming releases. While seeing these two renowned artists join each other on tour for the first time ever would be enough to sell any ticket, they up the ante by including two up-and-coming Ohio artists who are making their presence felt on a national stage as well.

While his name may be new to some ears, Producer/Emcee Ill Poetic has been building momentum as an artist to watch, whether through his production on prominent independent hip-hop releases or his buzzed-about mash-up albums. With his upcoming releases, Ill Poetic returns to the tradition of the Ohio funk sound as he prepares to let loose the first of a set of free EPs entitled “Synesthesia: The Yellow Movement.” A follow-up to his celebrated 2007 “The World is Ours” LP, “Synesthesia” broadens into a colorful playground of live musicianship, building upon a psychedelic futuristic Ohio funk and soul sound with hip-hop sensibilities. “We’ve been working these past few years with musicians from the Ohio funk era, and just want to recognize our lineage, push it forward and add our twist.” In preparation of this late spring release, Ill Poetic will join J. Rawls and Illogic, adding his blend of energy and introspection to the bill.

Finally, up-and-coming Columbus artist LxE for the Uncool will round out the tour. Climbing quickly through the underground landscape, LxE splashed onto the national hip-hop scene with his 2010 debut album “The Measure,” following up with noteworthy performances at this year’s SXSW and New York’s CMJs. As he prepares for his follow-up “Paper Rocket,” LxE will debut his witty, insightful lyricism to the Ohio masses.

For more information, go to: