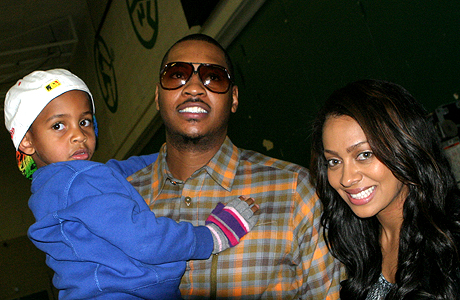 NEW YORK, Feb. 23, 2011 — VH1 has teamed up with actress and television personality La La Vazquez for the new series “La La’s Full Court Life” (working title). Slated for premiere in August, 2011, the 10 episode, 30 minute docu-series, which began filming in January, will continue where the wedding special, “La La’s Full Court Wedding” left off as La La and her husband, NBA Forward Carmelo Anthony, prepare for a sudden move to New York City, where he will play for the New York Knicks.

The wedding may be over but the fun is just beginning for La La. With the sudden news that her husband is being traded to the New York Knicks, La La will deal with new adventures in matrimony and parenthood as she prepares to move back home to New York City. Along the way, viewers will also see La La juggle her busy acting and television hosting career and seek advice from some of her famous friends, including 50 Cent, Kelly Rowland, Trina and Serena Williams to name a few.

“Viewers connect with La La because despite the fairytale wedding and NBA star husband, she is a real, down to earth, hardworking woman who stays true to herself,” said Jeff Olde, EVP, Original Programming and Production, VH1. “The best thing about the new series is that while pursuing and realizing her dreams, La La gets to take us back to her home in New York, where her story began.”

La La Vazquez will also be participating in a live chat with VH1 on Twitter during the 7pm and 11pm encore broadcasts of “La La’s Full Court Wedding” on Sunday, February 27.* Viewers can join by following @LaLa and @VH1, and via the hashtag #FullCourtWedding. VH1.com will be home to show information, video clips, full episodes and more when the series premieres.

VH1?s “La La’s Full Court Life” is executive produced by Cris Abrego for 51 Minds Entertainment, La La Vazquez and Carmelo Anthony for Krossover Entertainment, and Steven Grossman on behalf of The Collective. The series was created by Cris Abrego, La La Vazquez, and Steven Grossman. 51 Minds is an LLC Endemol Company, who also produced the record-breaking series “Rock of Love,” “Flavor of Love,” “Charm School,” and “I Love New York.” The production teams’ programming launched VH1 into their highest ratings ever. Ben Samek and Rabih Gholam are also executive producers for the series and the company. For VH1, the series is executive produced by Jill Holmes, Kristen Kelly and Jeff Olde.

Read more posts about this couple on my blog by clicking HERE.