Johannesburg (aka “Joburg” is a beautiful, cosmopolitan city, and I truly enjoyed spending time there this past winter (US summer) for the FIFA World Cup. Bafana! Bafana!  Hopefully, I will get to attend one of the African Fashion International (AFI) fashion weeks in the future.  😉  ~Ifelicious 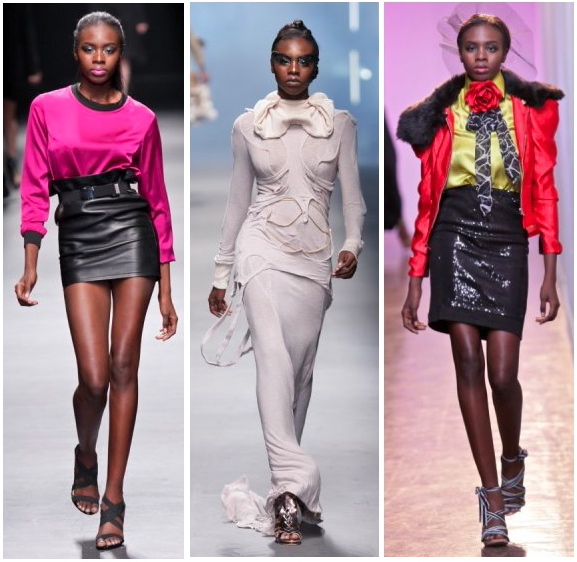 (NEW YORK) — Wednesday, February 16, 2011 through Saturday, February 19, 2011 was African Fashion International’s (AFI) Joburg Fashion Week, and the who’s who of fashion attended. Fashion designers included Abigail Betz, Abigail Keats, Avant, Bongie Walaza, David Tlale, Errol Arendz, Grapevine, Heni, Karabo Finger, KLûL CGDT, LISP, Loin Cloth and Ashes, Suzaan Heyns, Tart, Thula Sindi, Wild Fig (click the “Designers” tab on the Joburg Fashion Week website for more info on designers www.jfw2011.co.za) and many more brilliant fashion designers presenting their fabulous 2011 Fall/Winter collections.  Fashion model from Harlem, New York, Phelora Elle, had the experience of walking in several shows during the week fulfilling one of her lifelong dreams.  She owes it all to those who cast her in their fashion shows and to Base Model Agency in Cape Town, South Africa for believing in her.

“I was so happy when my agent told me that I would be walking in South Africa’s fashion week because I finally felt I would get my chance to grace the runway, after living in New York City all of my life and going from modeling agency to modeling agency.  Most of them were afraid to take a chance with me, and I thought I would never experience my dream of becoming a model,” said fashion model Phelora Elle.

Phelora’s journey to become a model started at the age of 10.  Being 5 feet 7 inches at the time, Phelora and her mom went on the hunt for modeling agencies; however, due to the lack of funds, Phelora’s dream had to be put on hold until she turned 18 when she met a friend who was willing to financially back her career as model.

“I always told my mom I wanted to be a model but we went to an agency and they wanted money for photos,and my mom couldn’t do it at the time so I couldn’t sign with the agency.  I was heartbroken, but my dream to be a model never died,” explained Phelora Elle.

Becoming a model still didn’t come easy for Phelora.  Although she was 5 feet 10 1/2 inches tall and 119 pounds at the age of 18 and was able to meet with the right modeling agencies in New York City, some were still afraid to take a chance with signing her as they would say her look was too strong or she needed to lose an inch on her hips.  This influenced Phelora to go overseas and see if she had a chance.

Phelora begin emailing, sending out her Polaroid photos to modeling agencies in London and South Africa hoping to get a response from someone.  Eventually, one of the agencies expressed interest.  Phelora shared, “I was so happy!  I didn’t know what to do.  My manager/mentor and I already saved up money in case we got a yes, and once we checked out the agency, he put me on a plane and to Cape Town, South Africa I went.”

Phelora Elle was signed to Base Model Agency (www.basemodelagency.com) in Cape Town, South Africa. Since being signed, she has worked nonstop. She has done a campaign for Woolworths Jeans, editorial print ads for Edgars in store magazine, Jet Club in store magazine, a commercial for Peugeot Cars and just did an 8 page spread in Seventeen Magazine: South Africa which comes out at the end of March 2011. This past week Phelora was able to walk for fashion designers Suzaan Heyns, Lisp, Wild Fig, Abigail Betz, Grapevine, Bongiwe Walaza, Thula Sindi, Tart and David Tlale during Joburg Fashion Week 2011.

“I was so excited walking for all of these designers, but I was also very tired but felt very blessed. I was blessed to walk for everyone, but I was a part of history during the last day of Joburg Fashion week because I walked for fashion designer David Tlale on the Nelson Mandela bridg,e and that was the first time a fashion show was ever done on the Nelson Mandela bridge, and I wanted to do my best”.

Now that Joburg Fashion Week is over, Phelora Elle has returned to Cape Town where she currently lives and is ready to take on more work with Base Model Agency.