I’m glad to see some hip hop surface with an uplifting message, particularly for the black community. There was a surge back in the late 80s and early 90s, and then the focus seem to go straight to material gain and misogony (maybe that’s extreme, but i know there are folks out there that know exactly what i mean). I’ll be checking this album out. ~Ifelicious 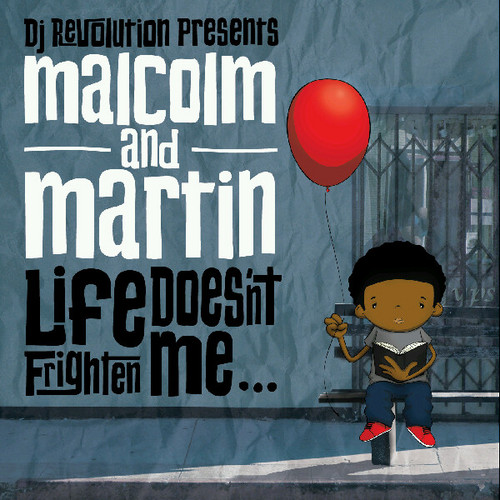 Group’s debut LP “Life Doesn’t Frighten Me” was released on February 1, 2011 via Soulspazm Records. Purchase now via iTunes and Amazon.

(Press Release) — As an internationally respected DJ and producer, Revolution’s skills have privileged the tracks of many Hip-Hop luminaries. Those skills were optimally displayed on his three critically-acclaimed solo and collaborative albums including R2K, King Of The Decks, and In 12s We Trust. DJ Revolution has also gained the esteem of fans from around the globe, as a renowned DJ, Producer and Editor of the highly-influential “The Wake Up Show” with Tech and Sway (MTV).  Through more than two decades of success as a DJ, Producer, and TV and film scorer DJ Revolution never forgot those early years and the promise of Hip-Hop.

Together, DJ Revolution, Styliztik Jones (hailing from Los Angeles, CA), and KB Imean (hailing from Queens, NY) represent one of the first genuine new rap groups to emerge in a generation. Not just another disparate crew, but a true collective of teachers and learners working to lead a people, a movement. Encouraged by the iconic men who fought for the every-man during a different time using different tools, the trio reverentially took on the moniker Malcolm & Martin as a siren call announcing new leaders armed with new tools to fight for modern-day liberation.
Fresh off the release of their latest, already heralded mixtape (“Malcolm and Martin were…Criminal Minded,” a 2010 re-working of the seminal album released by Boogie Down Productions [BDP] in 1987) which was released in November, the trio returns to wake-up sleeping Hip-Hop fans with their debut LP, DJ Revolution Presents Malcolm and Martin “Life Doesn’t Frighten Me,” that was released on February 1, 2011 on Soulspazm Records.

“It’s a progressive throwback. Its Hip-Hop music for the intelligent listener. Something you’ve never heard before, that feels like something you have loved your whole life” laments DJ Revolution on the group’s debut LP. Further validating Revolution’s claims, a who’s who of Hip-Hop luminaries have already voiced their overwhelming support for Malcolm & Martin; including DJ Premier, MTV’s Sway, Evidence, Statik Selektah, Masta Ace, Grammy-award winning Producer Dawuan Parker and Marco Polo who also produced the duo’s lead-single “Movement Music.”

No gimmicks included, Malcolm & Martin’s debut effort is a classic throwback that tackles real topics that are frequently glossed over in today’s urban music climate. Yet, perhaps, KB Imean sums up the group’s direction more eloquently, as he states “Life Doesn’t Frighten Me is our journey through real topics that are seldom talked about and or discussed in this day and age of Hip-Hop. We provide vivid commentary over gritty production; which is certain to provoke thoughts and opinions.”

***All Tracks produced by DJ Revolution unless otherwise noted

See what others are saying about Malcolm & Martin!

Sway MTV/The Wake Up Show?, “Its gritty and soulful music delivered by two lyrically skilled guys who can actually rap and feed you knowledge at the same time, without the insecurities and ignorant complexes. It’s wise music for those in the hood. The original Malcolm and Martin would be proud.”

DJ Premier DJ/Producer/Gang Starr, ?”Original and respectful beats and rhymes for the culture of Hip-Hop…Its dope they named the group after two of our most fearless leaders.”

Dawaun Parker Grammy Award winning producer for Aftermath Music, ?”Malcolm and Martin represents the sound of Hip-Hop you came up loving and listening to. Relevant today with the throwback vibe. DOPE!”

Evidence Producer/Artist/Dilated Peoples, “This sh*t has Quality written all over it. Two of the Illest Cali Emcees who feed off each other with every line. Backed by The Sharpest Muthaf*#ka I know…DJ Revolution.”

King Tech The Wake up Show-POWER106 fm Los Angeles/Worldwide, ?”Pure rhyme spitters, and with DJ Revolution on the controls your getting ready for a classic Album!”

Statik Selektah Producer/DJ-Sirius XM/-Worldwide, “DJ Rev is bringin’ this all together utilizing the classic tools of hip hop the way only a real DJ could.