Last year (March 2010), In the Life had an episode “Bullycides” about LGBT bullying (see my blog post with the episode by clicking HERE).  It’s an issue that can’t be discussed enough and bullying in general is a concern I hold near and dear to my own heart. No one deserves to be mistreated. I hope you find this month’s episode “You Are Not Alone” as enjoyable and informative as I did. ~Ifelicious 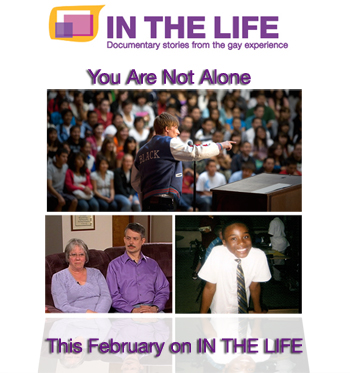 This month IN THE LIFE presents, “You Are Not Alone.” We begin with a look back at “Bullycides,” the national health crisis of young people taking their own lives as the result of bullying. Then, Oscar winning screenwriter Dustin Lance Black returns to his hometown high school to inspire LGBT students. And In The Life Media staff share their personal stories of hope for young viewers.

I want people to know my son is not alive because of what happened to him in his environment at school. I could not protect him between the hours of 8 to 3. – Sirdeaner Walker

Studies show that youth who are bullied are five times more likely to be depressed and to report suicidal thoughts. LGBT children and those who are perceived to be gay, lesbian or challenge traditional gender roles are among those most likely to be targeted by bullies. In this look at the most tragic outcome for kids tormented by kids, we meet the heartbroken families of Carl Joseph Hoover and Erik Mohat who are fighting for federal legislation to protect all children.

This is such a special day for me to come back to my school. I grew up in a conservative, conservative Mormon family. I knew that I was going to Hell. – Dustin Lance Black

Dustin Lance Black was a shy high school student when he first heard Harvey Milk’s message to gay kids in small towns across America: “I know that you cannot live on hope alone but without it life is not worth living.” Black survived high school and went on to write the Oscar winning film celebrating the life of his hero, Milk. Now, Black returns to his hometown of Salinas, California to deliver his own message of survival as part of The Homecoming Project, Live Out Loud’s grassroots initiative that brings successfully gay adults back to their high school to inspire a new generation of students.

“You Are Note Alone” premieres on air and online beginning on February 1, 2011. To find out when it airs in your area or to stream or download the video, visit the IN THE LIFE website: www.itlmedia.org. This episode or any other In The Life Media program can be enjoyed on your smartphone by texting DEBUT to 69866. (Standard messaging rates may apply)

I was literally a punching bag at school and at home. I decided that I couldn’t take it anymore. – Evan Bornacelli

The Yes Institute works to prevent suicide and ensure the healthy development of all youth through powerful communication and education on gender and orientation.