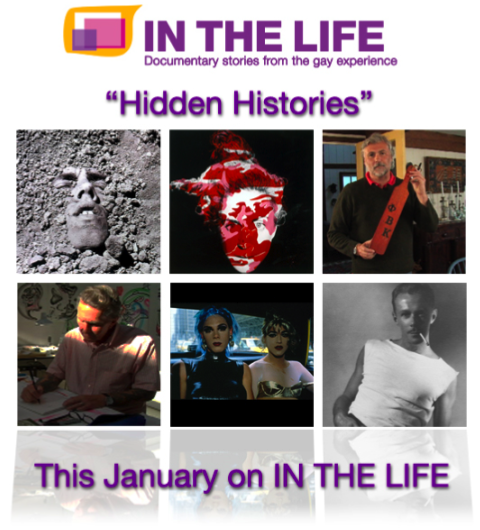 This month IN THE LIFE reveals hidden treasures in LGBT history which, unknown to many, have had lasting impact in shaping our lives. In the Smithsonian’s historic and controversial Hide/Seek exhibit, sexual expression and desire in American Art is viewed in a new way. And, we delve into the sexually charged, fiercely liberated, and fascinating life of Samuel Steward.

“The history of LGBT art in America has been a game of hide and seek; lots of images of import to sexual minorities but never talked about and rarely acknowledged.” – Jonathan Katz

IN THE LIFE is front and center at the Smithsonian’s National Portrait Gallery to cover the first major museum exhibition to feature artwork exploring sexual difference and gender expression. The headline-making exhibit explores artistic representations of sexual identity and homosexual desire. The show has ignited a wave of controversy among lawmakers, religious leaders and the public, leading to the removal of David Wojnarowicz’s acclaimed video, “A Fire in My Belly,” which represents the artist’s anger and rage as he faced death from AIDS. IN THE LIFE speaks with artists, historians and curators who contend that Hide/Seek reveals diverse reflections of sexuality and celebrates the complex contours of American identity.

“This is the Stud File. It’s Sam’s life-long record of all the people he had sex with during the course of his life. There are almost 900 cards in here.” – Justin Spring

A self-invented legend, Samuel Steward lived as an out gay man decades before the 1969 Stonewall Rebellion. Sam’s far-reaching impact includes detailed journals and recordkeeping which were invaluable to the studies of Alfred Kinsey and artistry that inspired famed designer Ed Hardy. In his book, “Secret Historian,” author Justin Spring chronicles the life of Samuel Steward, professor, tattoo artist and sexual renegade.

Hidden Histories will premiere on air and online beginning on January 1st, 2011. To find out when it airs in your area or to stream or download the video, visit the IN THE LIFE website: www.itlmedia.org. This episode or any other In The Life Media program can be enjoyed on your smartphone by texting “DEBUT” to 69866. You’ve got the power of LGBT media right in your pocket! (Standard messaging rates may apply.)