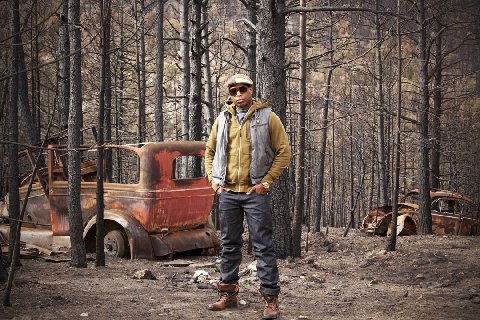 “Gutter Rainbows” album out Jan 25, 2011 on Javotti Media/3D.  Digital only in North America.  All formats in the rest of the world.

CLICK HERE to purchase the single “Cold Rain” from iTunes. Listen to the track below:

(Press Release) On Reflection Eternal’s 2000 album “Train of Thought,” Talib Kweli challenged fans, and himself, to “do what comes naturally.” After years of recording on mainstream labels, he now has the chance to produce exactly what he wants—and feels he needs—to produce: an album straight from his mouth to the ears of his fans. Invoking the true meaning of MC, Master of Ceremonies, Kweli brings incredible power to his live shows and feeds off the spontaneous energy of his audiences. Being able to interact directly with his audience and the musicians he most respects, he has created an album and a sound that best reproduces that ceremony for his fans. Finally, after serious urgency in the studio, Kweli presents “Gutter Rainbows,” an album that takes a trip back to childhood while marking the newest stage in his long and dynamic career. This newest release, recorded on his time and with his talent as the driving force, proves Kweli is a complete and formidable musician—it presents the depth and breadth of his experience and ability, and sets a new bar for the cutting edge of hip-hop music.

Through Kweli’s various collaborations, he has been able to grow as an artist and expand his fan base. For over 15 years, Kweli has been a king of New York hip-hop who has an expansive international audience. Kweli’s work with Mos Def on “Black Star” (1998) still stands as one of hip-hop’s premiere expressions of truth. On “Train of Thought,” Kweli teamed up with Hi Tek to form Reflection Eternal, a virtuoso hip-hop duo that continues to wow audiences and critics alike. In 2007, Kweli and DJ/Producer/MC Madlib gave their fans “Liberation”—originally released free on the internet—an album that was filled with their joint love of the music they make and the respect their fans give them. Performing all over the world with unique style and an unequaled dedication to his music, Kweli has worked with artists as diverse as Kanye West, Justin Timberlake, MF Doom, Mary J. Blige, Fabolous, Common, Nelly, The Roots, Quincy Jones, Gucci Mane, Norah Jones, KRS-One and many more. With a career filled with success and innovation, it comes as no surprise that both Jay-Z and 50 Cent, at the height of their stardom, both counted Kweli among their favorite rappers. On his “solo” albums, there is no question that his lyrical talent and unique musical drive rank up there with the best in the business. Recording with other world famous musicians or alone on the mic, Kweli gives both the long-time fan and the uninitiated an unforgettable experience.

“Gutter Rainbows” was recorded with the help of incredibly talented musicians from across the country. Eric Krasno, Jean Grae, Strong Arm Steady, Iron Solomon, Outasight, Kendra Ross, Sean Price, 88-Keys, Marco Polo, Ski Beatz, M-Phazes, S-1, E. Jones, Oh No and others make appearances. With this record, Kweli is able to make the music he knows and loves, play with the best musicians around, and bring it straight to his fans.

As a boy growing up in Brooklyn, Kweli saw gutters that ran with dirt, oil and water, revealing a shimmering rainbow to his child’s eyes. Drawing its title from this memory, this album puts at the raw center what his music has been doing for years: finding and preserving the beautiful in the hideous; the rainbows in the gutter. Weaving the lyrical and the gritty, the autobiographical with an honest, no-holds- barred hip-hop spirit; Kweli sticks fiercely to what feels true to him in creating the sound of this album. Without being tied to any particular label’s conception of what his sound should be or when his work should hit his fans, Kweli is free to build his most personal album yet in both content and motivation. Kweli’s true solo career has only just begun, and although the future holds more collaboration, “Gutter Rainbows” marks a new stage in the long and ever-evolving career of Talib Kweli.