You are here: Home / film, documentary, theater, arts / Interview with one of Mark Wahlberg’s real life entourage and actor in “The Fighter” Anthony H. Thomas

If you watch the movie trailer for “The Fighter,” you’ll catch a glimpse of Anthony H. Thomas (aka “Ace” or aka “Big Ace” or, back in the days of Marky Mark and the Funky Bunch, aka “Ashley Ace”) as the boxer wearing yellow shorts named Hernandez who is matched against “Irish” Micky Ward played by Mark Wahlberg.  “I’m the guy that he fights before he gets the title fight,” explains Thomas.  He’s also been training Wahlberg for the role of Micky in the boxing gym Wahlberg had built in his backyard about five years ago in an act of “if I build it, the movies will happen.” After several boxing related films fell through over the years and starring cast members came and went, Wahlberg battled in overtime to get “The Fighter” completed, always keeping his friends at his side in what is his real life entourage.  “The Fighter” opens on December 10, 2010 in theaters nationwide. Thomas has also written an unofficial theme song with the same title as the movie.

I had the opportunity to talk to Anthony Thomas last week about “The Fighter,” his nearly lifelong friendship with Mark Wahlberg, and his career accomplishments.  After our conversation, I realized that while Thomas has benefited from Wahlberg’s fame, he has not simply ridden Wahlberg’s coattails; rather, he has quite a career resume in his own right and has been grateful for the opportunities he’s landed on his own and through Wahlberg.  The interview is presented below.

Ifelicious:  Where are you from?

Anthony:  I was born in Roxbury, Massachusetts.

Ifelicious:  Have you heard the buzz back in the Boston area about this film coming out?  Has it been screened there?

Anthony:  We actually haven’t [had a movie screening out there], but it’s a great buzz.  Everyone’s waiting for the movie to come out, and the performances in the movie, they’re phenomenal.  Christian Bale does a great performance, and Melissa Leo is awesome in it and Amy Adams.  The whole cast is unbelievable.

Ifelicious:  When did you start training with Mark for ‘The Fighter?’

Anthony: Officially, I started training him in March of last year.  When I came in, he had just finished training with Micky and Dicky.  They had flown to LA.

Ifelicious:  Really?  The actual brothers from Lowell in which ‘The Fighter’ is based?

Anthony:  Ya, Mark was really really involved in this film.  He did everything to make sure he prepared for this role.  He did a great job.

Ifelicious:  Have you met Micky and Dicky as well?

Anthony:  Ya, they’re great guys…The whole family is amazing.  They come from a family of fighters…and they’re very close.  Dicky actually trained me for the film.  When we were in the gym and we were training and rehearsing, I was the only one that didn’t have a trainer, and he was like ‘Wait a minute…’  I was amazed by how fast he showed me these little bit of skills that helped me out so much in the ring.  I’m so thankful…Bo [also] trained me a little bit.  Bo Cleary was Mark’s trainer throughout the film also, and he gave me a lot of pointers.

Ifelicious:  Where did you train?

Anthony:  We trained in Mark’s backyard.  He built a boxing ring in his backyard.  When the first boxing movie came up, he built a ring,…He had all the fighters for the movie training there.  It gave us a chance to all get to know each other because we were all just right there…and we picked up on a lot of things, too, because all the fighters had different backgrounds.  Some of them were kickboxing champs some of them were actual boxing contenders.

Ifelicious:  How did you land the role of Hernandez?

Anthony:  I was actually just training with Mark, and David Russell [saw] us working out, and I felt very passionate about the film because I trained with [Mark] for so long, and I took a couple of beatings from him, so I was like ‘I think I deserve to be in this movie.’

Ifelicious:  What was it like working with Mark on set?

Anthony:  It was great.  Mark is exciting to work with because he’s so on it…I learned a lot in the ring actually filming the scene with him about throwing shots…Sometimes, being his friend, I don’t actually think about all the technical things that he knows that he can help us with.  I learned a lot from him that day.  I was really amazed.  I took a lot of punches.

Ifelicious:  Do you come from a boxing background?

Ifelicious:  I know you also write music.  Was any of your music used in the movie itself or on the soundtrack to be released?

Anthony:  Well, my song is actually an unofficial song for the soundtrack.  I submitted it for the movie, but I was told it was a time piece and they were looking for music during that time.

Ifelicious:  Oh ok, because this is supposed to take place in the 80s, right?

Anthony:  Ya…[the] song is called ‘The Fighter’ because I have to fight basically all my life to keep my dream alive.  You know, because sometimes people around us can discourage us.  You know how people think you’re just dreaming about what you want to do, and they don’t know how passionate you are and how much time you put into it, and where I come from, being in motion pictures is like a dream.  I’ve been told, ‘Stop keeping your head in the clouds,’ but I always knew that that was my life so I just stuck with it, and my song is to inspire people to believe in yourself no matter if people believe in your dream or not because if you can believe in it, you can make it happen.

Ifelicious:  That’s a great inspirational song.  When will I be able to hear it?

Anthony:  I’m actually working on the music video and it’s going to be released shortly after the film is released.

Ifelicious: Will you use some of the scenes from ‘The Fighter’ in the video?

Anthony: I don’t think so, but I’m actually going to LA over the weekend to film a scene with Mark for the video.

Ifelicious: Ok, so he’s going to get involved with that, too.

Ifelicious: Wow, he’s a good guy to you.

Anthony: He’s like my little brother, you know? We’ve been friends for years. When I was in my break dance crew [The Funk Effects], back in the day, Mark was actually the star of our group. He would come out and the whole crowd would go crazy because he was so little and he knew all the steps and he had his own following. People loved him. Anytime Mark stepped on the stage, the whole crowd just went bananas.

We then went on talking about how Thomas got started.  His early claim to fame was as the leader/choreographer for his dance crew The Funk Effects.  “My dance crew was like local legends in Boston.  We opened up for all the artists that came to Boston.  We started out just being in talent shows and we won every talent show so we started getting requests to be guest stars at a lot of events.  That’s how it began,” shared Thomas.  I had a fun 80s break dancing flashback when he said, “I would not only enter the talent competition, but a lot of the groups would come to my house with linoleum and ask me to teach them some moves before the show.  So I’m showing them moves for the show and I gotta compete against them also, so it was crazy, but I had a lot of fun.”

NEW EDITION, NEW KIDS ON THE BLOCK, MARKY MARK AND THE FUNKY BUNCH 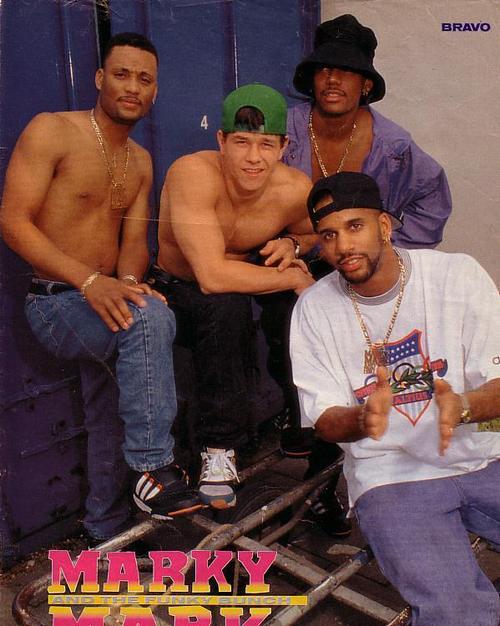 One of the Boston talent shows he won even landed him a spot on New Edition, an opportunity he turned down.  “I didn’t really feel like I was part of a boy band, and I didn’t feel like I was boy band material.  It’s one of the regrets that I have.  I wish I stuck in there with those guys because they were good friends of mine, but because I had my own group at the time, too, I felt like I was more a part of a hip hop group than a boy band, ” explained Thomas.  He did, however, do choreography with New Edition and later New Kids on the Block (NKOTB) thanks to Donnie Wahlberg (Marks’ brother) and Maurice Starr.  While Thomas continued doing dance choreography for dozens of groups and artists, he got together with Mark Wahlberg to form a group of their own called Marky Mark and the Funky Bunch.

“I worked alongside David Vaughan to help them to better their stage presence, and throughout the course of working with them we established great friendships, and we always promised each other whoever made it first we’d help each other out.  So once they (NKOTB) had taken off, he (Donnie) came back and told me about Mark’s project and asked me to choreograph the group.  So I got my old band together, this band that I used to work with, this group called Best Kept Secret, and I formed a group, The Funky Bunch, with Scott Ross (Scottie Gee), and Hector Barros (Hector the Booty Inspector), and Terry Yancey (DJ T)- he was sort of already in the group as the DJ and we just started clicking and everything worked really well.”

From there, Thomas moved out to LA with Wahlberg in a story similar to Wahlberg’s hit HBO series “Entourage,” an idea that Thomas said came from him and the show’s executive producer Eric Weinstein:

“The story actually came about with me and Eric.  We were actually sitting around one day thinking it would be great if we wrote a show about us, the real entourage and our experiences because it was just incredible some of the things that we went through and the people we came in contact with was mind blowing, and it ended up becoming a show.  When I met those guys (the cast of ‘Entourage’), I was like, ‘Wow, you guys are actually doing a show about us.  This is amazing.’”

When Wahlberg was asked the same question by Lara Logan on the CBS “60 Minutes” episode that aired on Sunday, November 21, 2010, he started out by saying, “It depends on who you ask.” (check out 60 Minutes clips “How Mark Wahlberg Reinvented Himself” http://www.cbsnews.com/video/watch/?id=7076433n and “Mark Wahlberg’s Real-Life Entourage” http://bit.ly/bpBhus) 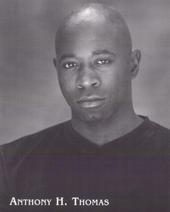 Thomas has also landed several acting roles besides “The Fighter.”  Many of them are also films that included Wahlberg in the cast such as “Planet of the Apes,” “Invincible,” and “I Heart Huckabees.”  He’s also had roles on his own such as the indie flick “Runaways.”  Writing screenplays is also one of Thomas’s talents.  When I asked which of his talents prevails, he responded, “I’m very passionate about motion pictures and music and writing so I feel like directing would give me a chance to merge everything together.”

For more about Anthony H. Thomas go to myspace.com/BigAceMusic or twitter.com/BIGACEmusic.