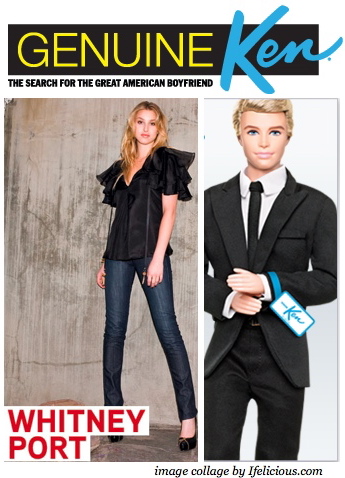 To some degree, I get it.  We’ve seen Whitney Port very focused on her career as a fashion designer in “The Hills” followed by “The City,” and this online reality hosting gig gives her something fresh to do (notice I said online show…just sayin’…).  What I don’t get is why this show?  She’s been such a young power woman and this show, especially with “Ken” in the title, is such a step backward for her and women in general.  The show idea was conceived by Mattel, creators of the Ken and Barbie dolls, and is somewhat of a tribute to Ken’s upcoming 50th anniversary.

“Genuine Ken: The Search for the Great American Boyfriend” is an online competition reality show unlike any other. For eight drama packed episodes, eight eligible men will duke it out in challenge after challenge to be named the ultimate boyfriend – “A Genuine Ken” (What a Doll!). They’ll be evaluated on date-ability, personal style, personality, general hotness, and overall KEN-ability.

Everyday the 10 guys with the most thumbs up votes will be deemed a “Genuine Ken” and be able to upload a video to their profile. These videos will help contestants receive even more votes, and get them one step closer to being on the show!

I think I just threw up in my mouth a little.

Read the full press release in Variety.  Keep up with Whitney Port through her blog whitneyport.celebuzz.com.

Read all of my blog posts on The City by CLICKING HERE.

Read all of my blog posts on The Hills by CLICKING HERE.