You are here: Home / ifelicious tv / the hills / Audrina’s mom reacts to DWTS with drunken outburst and The Patridges go reality TV

Besides the drunken rant Audrina’s mom burst into last week after Audrina was surprisingly voted off DWTS (you can read all about that below), what about Audrina’s new reality show on VH1? I’m not sure how interested I am in getting to Audrina and her family on television. I guess we’ll just have to wait and see. ~Ifelicious 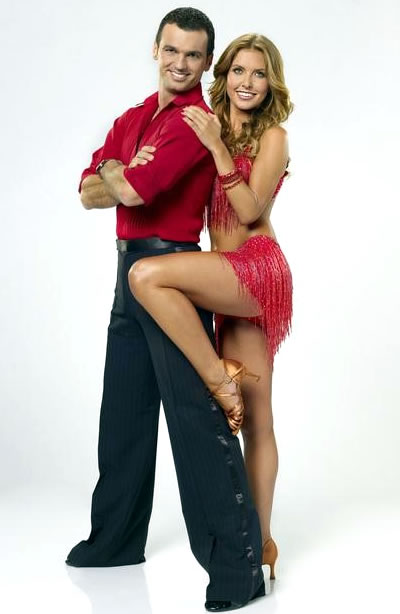 Audrina Patridge took her surprise elimination from “Dancing with the Stars” with a smile, but her mom Lynn took it with too much to drink and a rant to paparazzi. Apparently Lynn had one too many glasses of wine when she spoke to photographers outside Los Angeles’ popular restaurant Beso on Tuesday night.

“When one door closes another one opens. Audrina is going to f—ing rise. She’s got class. You know why? She’s a Polish, Catholic, f—ing full-on Italian. Not only that, she was raised right. And I don’t give a s–t. It’s all American,” she told paparazzi.

She then took a swipe at Patridge’s former “The Hills” co-star Lauren Conrad. “We’re going to f—ing smoke, especially Lauren Conrad’s pissy a– little fashion s—. That bi**h wants to bring it on? Let’s go!” she said.

Lynn said she realized Audrina would “be so pissed I’m talking to you idiots,” but that didn’t stop her from taking another swipe at “The Hills” girls. “I’ve had it. I’ve been a celebrity mom eight years through this Hills bulls–t, but Audrina’s going to the next level, baby,” she said. “F—ing Hills girls — Hills tramps! My baby’s a star! She’s the only one that has some class and I don’t give a f— about it.”

Lynn was finally carried back inside the restaurant by an unidentified man. She is set to star with Audrina on a new VH1 reality show, and judging by her rant the show shouldn’t be boring.

Read all of my blog posts about former Hills cast by CLICKING HERE.