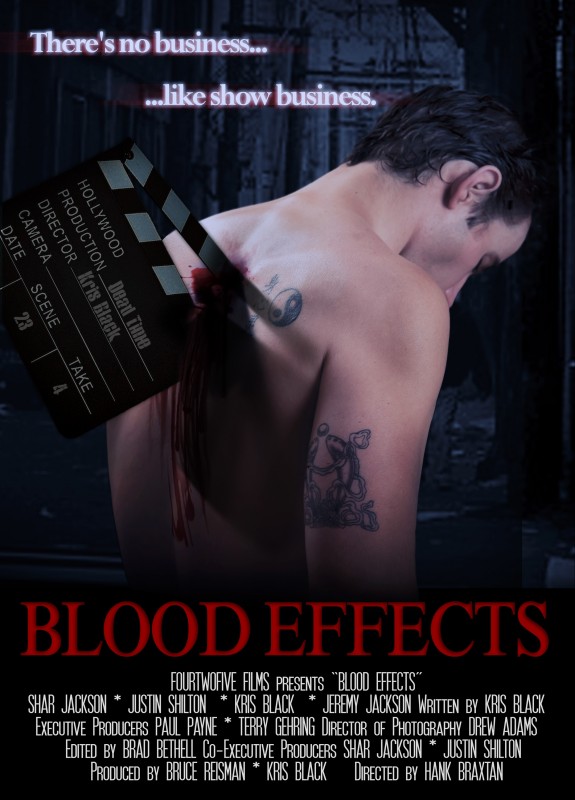 Hollywood, Ca., October 29, 2010 — With “The House that Jack Built” DVD recently released just in time for Halloween, producing partners Kris Black and Bruce Reisman are bidding a fond farewell to the horror-flick genre with the completion of their “love-hate letter” to independent horror movie-making “Blood Effects.”  The co-production from Reisman (producer) and Black (co-producer/writer/star) is completing post-production for an early 2011 release. This also marks the close of their original independent film production company, FourTwoFive Films, as they enter a new business venture under Four Legged Pictures.

The cast of “Blood Effects” (see photo below) includes Shar Jackson (far right, “Celebrity Fit Club 7”), Justin Shilton (left of Shar, “Little Miss Sunshine“), Kris Black (foreground, FourTwoFive Films) and Jeremy Jackson (top center, “Baywatch”).  It’s the cast that “pokes fun at themselves, at their own tabloid celebrity status,” says Reisman.  “That’s another aspect of this movie that’s so cool.  These talented people seamlessly go from fantasy to reality, all contained in Black’s screenplay.  These are seasoned pros and the best ensemble I’ve ever worked with.”

Already creating a buzz as a mockumentary-styled thriller, “Blood Effects” is literally like movie making, both scary and fake.  According to Reisman, “What’s really scary is how reality blends with fantasy so effortlessly… and that’s when the audience becomes intrigued.” Reisman goes on to say that “‘Blood Effects’ is the perfect title for Black’s ‘fly on the wall’ thriller because it’s not a bloody movie, but without gore, it’s one of the scariest things movies I’ve ever seen.”

“What’s scary,” according Black, “is how the story is fiction, but the reality of how these scary little movies get made took over the set.”  Reisman went on to say, “Now that ‘Paranormal Activity’ has set the standard for Hollywood schlock success, it was time to lift the veil, as it were, on how scary independent movie making is in and of itself.  Christopher Guest brilliantly created the template of the mockumentary, but ‘Blood Effects’ takes it even further because, as the title suggests, the better the bullshit, the better this genre is.”

With “The House that Jack Built” already out on DVD and “Blood Effects” soon to be released, Black and Reisman are closing the doors on the horror film production company FourTwoFive Films and have already moved ahead to producing their fact-inspired screenplay, “Five Good Years” under their newly formed production company Four Legged Pictures.

“We’ve had our day and had our say,” says Reisman, “on low budget, renegade-style movie making.  We took a lot of licks, delivered some kicks; and it’s always gonna be ‘Rashoman’ (two sides to every story), but to make a great movie, any movie, you have to start with a good script and proceed by gathering good people.  Every director, producer, etc. has his enemies.  I didn’t understand that concept until we found some new friends and relieved ourselves of most of the old guard.  Too many ‘blood effects,” per se (knives in the back as the poster suggests).”

In closing, “But who was it that said,” asks Reisman, “‘In Hollywood, your friends are the ones who knife you in the chest?’  True, but we often ask for it, and then form new companies.”

Read all of my blog posts about FourTwoFive Films by CLICKING HERE.

Read all of my blog posts about Four Legged Pictures by CLICKING HERE.

Become a fan of “Five Good Years” on Facebook by CLICKING HERE.

Read all of my blog posts on indie film and the arts by CLICKING HERE.