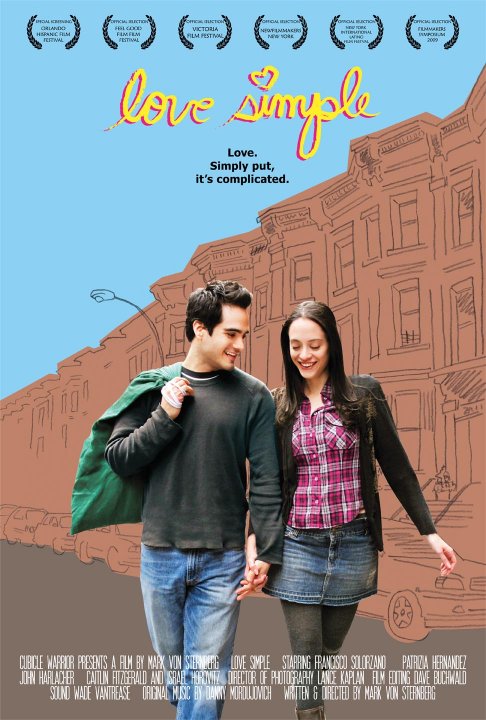 NEW YORK, NY, October 27, 2010 – Your Indie Films/Synergetic Distribution has acquired worldwide distribution rights for the film “Love Simple,” directed by Mark von Sternberg.  The film will be available for purchase internationally on Tuesday, November 9, 2010,  and 10% of the proceeds of the film will benefit the world renowned Lupus Research Institute.

View the trailer below…

The DVD version of the film will be made available through several worldwide online venues including: amazon.com, bn.com (Barnes and Noble), target.com, bestbuy.com and walmart.com.

Hailed by “Variety” as an “engaging neighborhood pic…with genuine flair and wit,” “Love Simple” is a coming-of-age romance where the lead character Seta falls in love after meeting, Adam (Francisco Solorzano) in a Brooklyn Laundromat; however, both must deal with lies and personal situations in order for their relationship to survive — he lives at home caring for his sick father, and she has suffered from lupus her entire life.

“It made sense for us to help shine a light on lupus and raise funds for this vital organization, particularly in this year that saw lupus frequently in the news with Lady Gaga announcing a borderline diagnosis, and the heart-warming story of Snoop Dogg’s daughter’s battle with the disease,” states von Sternberg. “Based on the overwhelming response we’ve received from the lupus community, the film accurately shows the often misunderstood symptoms and issues associated with lupus.”

In addition to “Variety,” the film has received glowing reviews from nearly a dozen lupus and chronic illness bloggers, and will be featured as the lead story in the November issue of “The Lupus Magazine,” an online, world-wide publication for the lupus community.

“Based on the positive buzz the film has generated so far, pre-sales of the film have been strong,” said Robert Rangel, of Your Indie Films/Synergetic.  “We look forward to working with the “Love Simple” team on helping spread the word about this wonderful film, and its efforts on raising awareness and funds for lupus research.”

The Lupus Research Institute (LRI) is the world’s leading private supporter of innovative research in lupus, and champions scientific, creativity and risk-taking in the hunt for solutions to this autoimmune disease. The LRI’s research strategy and results are changing the course of lupus research and bringing new hope to people with lupus around the world.

Reviews of the film “Love Simple”…

“An engaging neighborhood pic, with genuine flair and wit. The obstacles along the central duo’s rocky road to coupledom are untraditionally somber: She has lupus, he’s stuck at home caring for his wheelchair-bound father.” Variety

“The inspiring and engaging film is a realistic portrayal of a lupus patient, and will serve as an invaluable way for us to raise awareness of a disease that is a leading cause of heart attack, kidney disease, and stroke among young women.” Margaret G. Dowd, Executive Director, S.L.E. Lupus Foundation.

“This movie is sorely needed. Love Simple is a huge gift, not only for Lupus sufferers but for their families and friends, and the world. Beautifully filmed, it is the first easily accessible media piece that I have seen to actually bring real awareness to Lupus.” Julia Sherred, editor, www.geekypleasures.com

“A movie whose female lead has lupus – which may be the first of its kind! Check out their website. And spread the word!”

“I think it is very relatable for many people. It deals a lot with dating, relationships, and family difficulties that can come with Lupus. I thought it was pretty accurate in its portrayal of Lupus.” www.cureforlupus.org

“The producers and directors did a GREAT JOB!!!!!” Jennifer Morrison, editor, lupuseveryday.blogspot.com

Read all of my blog posts about indie film by CLICKING HERE.