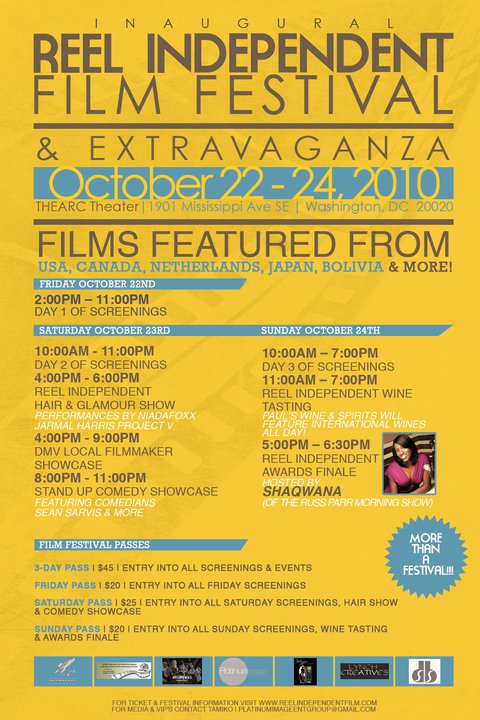 Washington, DC – October 15, 2010 – The Inaugural Reel Independent Film Festival & Extravaganza presented by Reel Independent Film Extravaganza will be one of the largest film festivals to ever take place in the Washington, DC area. The festival will be held on October 22 – 24, 2010 at THEARC Theater, 1901 Mississippi Ave, Washington, DC 20020. The Reel Independent Film Festival & Extravaganza (RIFFE) “More than a festival” is an event created BY filmmakers FOR filmmakers. Spencer F. Johnson, MD, the CEO of Prince George’s County based Skyrocket Productions, LLC is the Founder of the festival. Dr. Johnson’s mission is to provide an event which strives to present the best of truly independent films in a variety of categories from around the world. The festival environment is designed to provide unique opportunities for participants to interact with one another and take part in Q&A’s after certain films, conducted by cutting edge members of the independent film community and entertainment professionals.

RIFFE is a three-day celebration of emerging filmmakers, independent films and entertainment industry professionals in an intimate setting. Attendees will witness a fabulous hair and glamour show, a wine tasting, a comedy showcase, an awards ceremony and most importantly, an array of amazing independent films of all genres from the USA, Canada, Japan, the Netherlands and Bolivia. Several of the featured films will be world, DMV (DC/MD/VA) and North American Premiere screenings. Opening and closing curated film highlights include award winning “Blue Ridge” and the crime thriller “Boy Wonder” in addition to documentary film highlights of interest to the local community at large due to rave reviews, “Redemption Stone” and “Come Walk in my Shoes.”

Sunday launches a day of more great films with the added bonus of fine wine. Attendees will enjoy The Reel Independent Wine Tasting as Paul’s Wine & Spirits provides a selection of international wines throughout the day. Concluding the entertaining weekend will be The Reel Independent Awards Finale hosted by Shaqwana, a member of the hilarious, syndicated Russ Parr Morning Show. One filmmaker will be awarded $1,000 for the Viewers’ Choice REEL Best Film Award, one filmmaker will be awarded $1,000 for the juried REEL Filmmaker to Watch Award and seven filmmakers will be awarded REEL Recognition Awards.  Red carpet will begin promptly at 5:30pm prior to the awards show.

The Reel Independent Film Festival & Extravaganza is more than a festival, it is a new kind of experience! This festival and extravaganza is open to the public.

A portion of the proceeds from the film festival will benefit A World Fit for Kids and Susan G. Komen for the Cure in honor of October, Breast Cancer Awareness Month.

Ø Friday Pass | $20 | ENTRY INTO ALL SCREENINGS ON FRIDAY ONLY