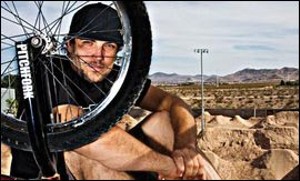 I can’t stop thinking about TJ, so I’m putting my thoughts out there and hopefully some positive healing vibes, too.  TJ Lavin, whom I’ve loved as the host for the Real World/Road Rules Challenges, is in critical condition after a BMX stunt gone wrong on Thursday, November 16 October 14, 2010 in Las Vegas.  Also a pro BMX rider, he was participating in the preliminary round for the Dew Tour Championships being held at the Hard Rock Hotel & Casino.  After these championships, TJ was planning to retire from the competitive circuit.

During a practice run on Thursday evening, TJ was attempting a nac nac combination and did not get his feet back on his pedals before landing.  I’ve posted the video below for you to see (it’s not gross, at least not like the video that they replayed over and over of the luge rider Nodar Kumaritashvili during the winter olympics).  He lost hold of the bike, falling to the ground, and instantly knocked unconscious.  Chas Aday, friend and business partner of TJ, told MTV that the injuries he sustained were an orbital fracture on his eye, shattered right wrist, and bleeding on his brain.  Chas clarified that, contrary to most reports, he did not fracture any ribs.

TJ remains in a medically induced coma as a result of his brain injury at University Medical Center.  At the time of this post, there was no further information available about his current condition.

TJ Lavin fans, please comment with your well wishes and words of encouragement.

The latest reports came in earlier this afternoon and say that T.J. is still in a medically induced coma, but was able to move his hands early Saturday. He was also able to give the neuro a thumbs up while he was momentarily awake, and appears to be showing signs of improvement.

Update 10/17/2010, 6:50am EST: Not to be overlooked is TJ’s close friend Ty Pinney who also had a biking accident while at TJ’s house on Wednesday, October 13, 2010 and is also in a medically induced coma at University Medical Center.  There’s some speculation that Ty’s accident the evening before may have affected TJ’s mental focus going into the preliminary rounds. MMA Fix wrote:

Lavin wore a The Horror Project (a clothing company owned by Pinney) t-shirt in honor of Pinney while he competed.
The two men who are good friends are currently in ICU at the same hospital in Las Vegas.

Update October 17, 9:45pm EST: Outlook continues to look good for TJ. Glad to read the MRI did not reveal anything and the doctors feel comfort removing him from the medically induced coma.  At the same time, he’s not out of the woods yet.  His friend Chas Aday told MTV:

“They took him off sedation … yesterday morning to where he followed some simple commands and then they put him back on sedation,” Aday said. “He had an MRI yesterday that came back. They didn’t see any further brain damage or anything but there’s still some swelling there. They took him off the sedation this morning completely but he’s still unconscious.”

…”He’s got a slight fever and has pneumonia that they started some antibiotics for right now,” Aday said.

Sadly, TJ’s friend who is also in the hospital, Ty Pinney, is not getting the same level of news coverage so I have no current update on his condition.