Earlier this week, I spoke with lead singer for Hot Chelle Rae (HCR), RK Follese. He’s real down to earth and candid. We covered everything from their upcoming tour with Parachute to his bucket list and cyber-bullying. It’s one of my longer interview write-ups, but I wanted you to walk away with more than just HCR’s music since their notoriety is growing by the minute.  Take a look below:

Ifelicious: You guys are getting ready to tour in about a week, and you guys have been touring for almost a year now.  What’s it like being on the road so much?

Ifelicious: So you’re really looking forward to it?

RK: I’m really looking forward to it.  It’s the type of thing that…We all like to be at new places all the time, and also you don’t spend as much money when you’re on the road.  It’s really just nice.  I really enjoy it…It really becomes like a way of life.

Ifelicious: So you don’t get homesick and missed loved ones?

RK: Ya, you do obviously miss loved ones but Jamie is my brother and…the drummer in the band…it’s definitely nice to have him on the road because he’s definitely my best buddy…Nashville is such a cool place because you get to go through it a lot on tour.  It’s kind of like the belt buckle of touring hubs, and you get to stop in town a lot and see your family for a night, and you know go out and eat or something like that.  It’s really not that bad.

Ifelicious: Do you do the tour bus thing?  Everyone all holed up in the bus.

RK: No, we still tour in vans.

RK: Ya well, buses are expensive and we haven’t been out for a extended period of time.  We’ve been doing so many one-off shows and radio shows.  Actually, we’ve been going by plane more than by vehicle.

Ifelicious: I’m trying to create a picture in my mind of you guys on the road.  You’re at the destination, do your thing, and you’re hanging out, of course.

RK: Ya, we’re definitely hanging out.  It’s definitely a lot of fun.  We’re big pranksters so whether it’s by plane or by car, we’re always playing pranks on each other.  We keep it interesting for sure.

“Bleed” on Billboard Top 40 and next single

Ifelicious:  So you’ve got “Bleed” on the Billboard Top 40 now…Have you thought of releasing another [single] at this point.

RK:  We’re talking about releasing “The Distance” as a single. Actually, that’s exactly what phase we’re in right now is deciding what to release for the next single.

Ifelicious:  Maybe if you start with yourself and go through the rest of the band mates, like how would you describe them personality-wise because I’ve read a lot and watched a lot of your interviews and you all definitely have very different tastes and backgrounds and things like that.

RK:  As far as Ian goes, he’s definitely more of the artsy type person.  He’s really artistic.  He’s a photographer.  He really likes relaxing music and stuff like that, but he definitely knows how to have a good time as well.  Jamie, the drummer, is definitely the most shy of the group, and he’s really not as shy anymore.  He’s come out of his shell, but he’s still probably the most shy of the group.  Nash is probably the most outgoing and the biggest social butterfly and the most outgoing of the group.  And I can be like either one I guess.  I guess I’m kind of a chameleon.  I can be social sometimes, but I also do like my alone time.

Ifelicious:  So is there anybody, when you’re on the road, that you need to keep your eye on?

RK:  I’d say we have to keep track of Ian the most.  He’s really not that bad, and if he heard me say that, he’d probably be upset.  Nash is the latest for sure, but Ian is the most, like, just kind of does whatever he feels like doing.

Ifelicious:  So you might lose him for a minute.

RK:  Well ya, we’ll loose him for like a minute and we’re like, ‘Man! We have to go on in two minutes,’ but then he’s there a minute before the show.

Ifelicious:  Do you feel that you have matured as a group?  I mean, I know that every show is different.  Venues are different.  There’s things that go wrong that are unpredictable, and all that…How have you all grown as a group in terms of performing?

RK:  I’d say that we’ve grown and learned a lot from other artists.  You learn as you tour with different people.  I mean everyone has their own different style of performing, and you learn new things from every artist that you tour with, and it helps you grow as a band.  We’re just so used to playing together that it’s much more natural now, and I feel like we’re a much tighter band than we ever have been just from constantly playing and performing.

What fans can expect 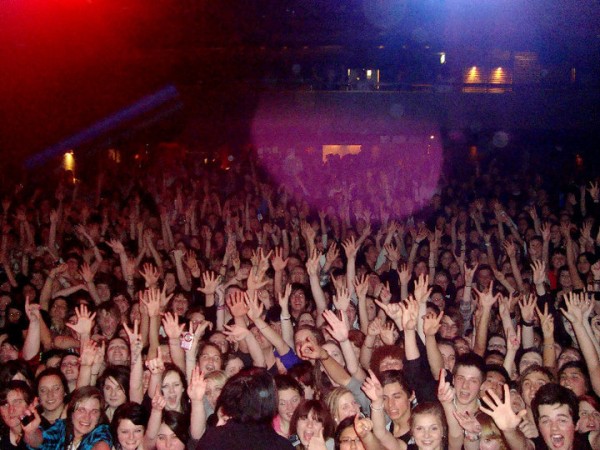 Ifelicious:  What should people look forward to when they go out to a show.  I’m in Columbus, Ohio so I know you guys are coming through there in about a week-and-a-half, I think.

RK:  Ya, we’re excited.  We’re really excited…We tend to like really pop music, but live it’s definitely more of a rock show.  It’s very very energetic and kind of bit intense sometimes, but in a good way, I think.

Ifelicious:  Do you ever test out any new material?

RK:  Uh, ya actually.  That’s what we’re doing…today.  We’ve been working on it for a couple  of weeks.  We probably have nine or ten songs that we just finished demoing.

Ifelicious:  So that’s something we may hear during a concert?

Ifelicious:  Do you have plans to start working on a second album any time soon, like after this fall tour?

RK:  Ya…hopefully if we get some time, we talked about getting in the studio over the Christmas break.

Ifelicious:  I know the process is a long process, but as least there are plans to start.

RK:  Ya, it’s a long process.  We’re kind of in between ideas…In the music business these days, it’s just such a different ball game…There are so many bands that are releasing EPs and stuff like that.  We’re just kind of formulating a game plan on what’s the smartest move for us as a band.

Ifelicious:  I also read that you had 60 some odd songs that you had to narrow down to an album, and I just can’t imagine what that’s like.  It would be like somebody saying edit my blog down to, I mean I guess we all go through it in our own way.

RK:  It’s so easy but so difficult at the same time.  It’s kind of like a sports team in a way.  It’s like all the songs come to try out, and there are ones that are not obviously not going to work, and then when you get down to like 15 and you’re trying to cut down to like 10 or 11 then it starts to become, ‘Well, someone really likes this song and I really like this [other] song, so what are we going to do?’

Ifelicious:  Well, was there a song in particular that you wish made the album?

RK:  There’s a couple of songs that got leaked actually that are on a couple of blogs.  I don’t know how people find stuff like this.  I’ve always been curious how it works…There’s a song called ‘Champagne and Razorblades’ and there’s a song called ‘Smile’ that we never did.  We just had the demos of it, and those were leaked on the internet.  And I actually really liked ‘Champagne and Razorblades,’ and I thought it was a really cool track.

Ifelicious:  Well, you’ve got a second round so I guess you will be revisiting some old stuff and whatever new has come up since then. 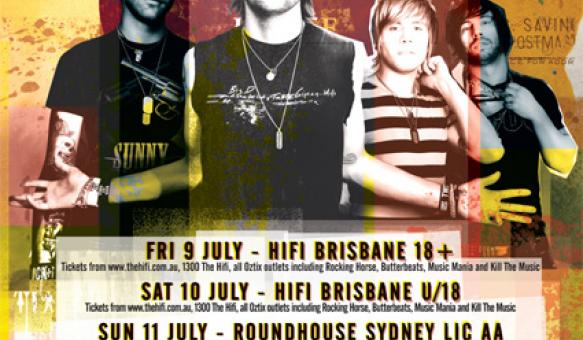 RK:  Um, I mean we’d have to do a separate interview for me to tell you how amazing that place is.

Ifelicious:  How long were you there?

Ifelicious:  Was this a first time trip for everybody?

RK:  Definitely a first time trip for everybody.  Everybody but Jamie has been out of the country before.  Ian lived in Ireland for six months, and I’ve been to London.  We’ve all been to different places, but Australia just really took the cake.

Ifelicious:  Wow, if we get a chance [to talk] again sometime, I’d love to hear more about it.

RK:  Yes, you need to go there.  If you’re a traveler, you need to do it, but you need to make sure you don’t just do one city.  Go to Sydney for a couple of days and then go up to Brisbane and try to see all of the cities because they’re all so so different.

Ifelicious:  Wow, so where did you perform?

RK:  We went on a tour out there with Boys Like Girls…and they were doing two shows in each city…so we played very much typical club type places.

Ifelicious:  I’m such a reality junkie and I don’t know if that even matters to you, but I noticed that you had Stephanie Pratt in your “I Like To Dance” video…Do you all know her, or how did that even happen? 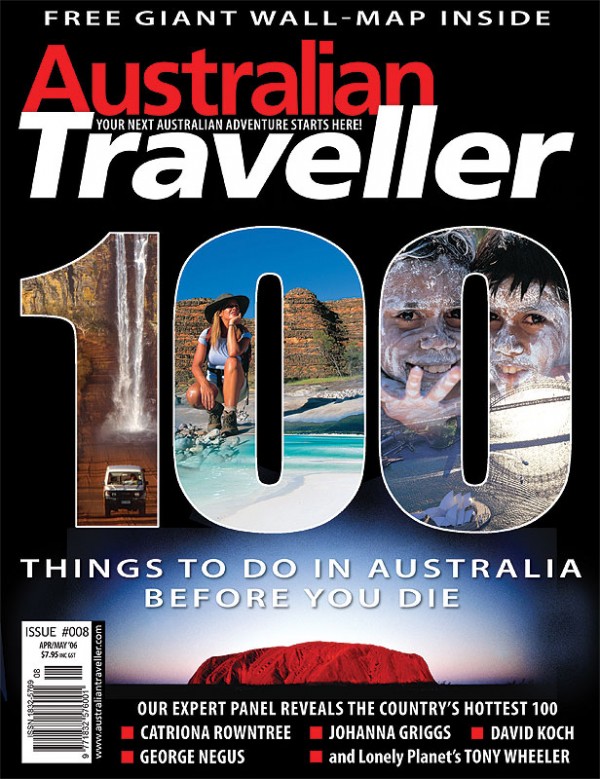 RK: I would definitely like to live in Australia for at least a little while.

Ifelicious:  Wow!  It had that much of an impact.

RK:  Ya, I would definitely like to live in Sydney at least for a little while.

Ifelicious:  I know that bullying and cyber-bullying has been talked about a lot lately.  I just wanted to ask your perspective on that.  Is that something that you’ve gone through, or what would you say to anyone who has gone through any bullying?

RK:  I think anyone who has grown up in our generation has experienced some sort of cyber-bullying…my sister is 15, and I see it a lot more in her generation than like I experienced in mine.  It’s almost impossible to monitor the content that your kids can get to these days on the internet without just taking away the internet in general.  Cyber-bullying is I think worse than regular bullying in a lot of respects because people have the courage to say things that they don’t have the courage to say in person.

Ifelicious:  I know they’re doing a lot of awareness stuff and all that, but that’s like a step one.  There’s got to be a lot more

RK:  Kids are always going to bully and it sucks.  I didn’t get bullied as far as beat up, but my sister definitely deals with girls.

Ifelicious:  Ya, girls are tough.  They gossip and get evil.

RK:  Ya, you don’t mess with girls…I think bullying is awful.