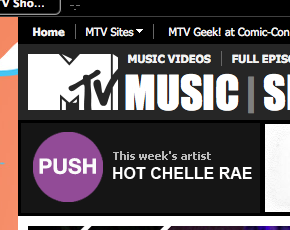 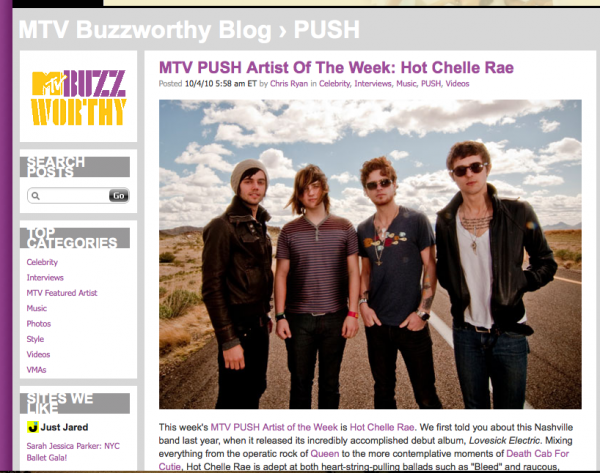 The group that got its name from a crazed Myspace fan, Hot Chelle Rae (HCR), was recognized as this week’s MTV PUSH Artist of the Week.  Band members and Nashville natives Ryan Keith Follese, Nash Overstreet, Ian Keaggy, and Jamie Follese finally broke into the Billboard Top 40 this past August with “Bleed” from their debut album “Lovesick Electric.”  Their music has also been played on several popular TV shows such as “The Hills,” “So You Think You Can Dance,” and “90210.”  Stephanie Pratt from “The Hills” is featured in HCR’s video for “I Like To Dance.”

After “Lovesick Electric” dropped in October 2009, HCR began touring with artists such as Owl City, Boys Like Girls, and Third Eye Blind.  They are about to embark on a Fall tour with Parachute that kicks off in Philadelphia on October 19, 2010 and finishes in Charlottesville on November 13, 2010 (see full tour schedule below).

“‘Lovesick Electric’ brims with the confidence and youthful energy that only a group of musicians with serious chops can deliver. “I think the album really reflects who we are and how we want the world to feel,” Overstreet says. “We can have a lot of fun and goof off, or we can be very serious and work really hard, and the album shows it all. We’ve got songs for people to listen to if they’re going through a break-up, like ‘The Distance’ or ‘Last One Standing,’ or if they want to just forget about work, like ‘I Like to Dance,’ or they want to dream about the future, like ‘Say.’ We’ve tried hard to make it completely accessible and something people can really relate to no matter what’s going on in their lives.”(source: HCR bio)

New to HCR? Get hip to them below:

Online interviews with Hot Chelle Rae that I liked