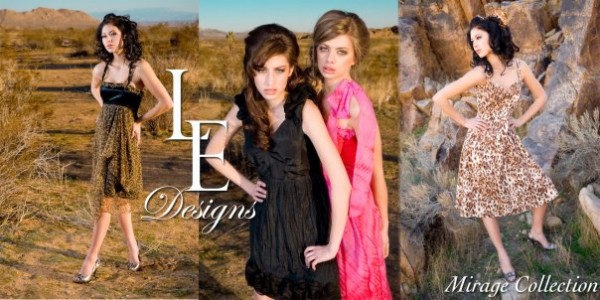 LOS ANGELES (24-7PressRelease) — Los Angeles based, celebrity fashion designer Lauren Elaine plans big for the spring/summer 2011 season with an inspired Black Label couture dress collection, and a unique Los Angeles Fashion Week unveiling. The new collection, inspired by several recent trips abroad and her signature “modern-princess” design aesthetic, will see a campaign and short film shoot in the desert of El Mirage, CA on Friday September 17th, 2010, and a formal runway debut on October 19th. For the collection, designer Lauren Elaine combines easy glamour with an assertive edge, and themes of escapism and adventure to create a woman reminiscent of James Bond’s leading ladies. The SS2011 campaign will be shot by photographer Jeff Gottlieb, and will predominantly feature a collection campaign film captured by cinematographer Andrew Waruszewski – and introducing model Hailey Harper as the “face” of the new collection. The runway debut will combine with a red carpet celebrity charity benefit for the “Art of Elysium“- an organization dedicated to art’s education for children with serious medical conditions.

“I’ve always been inspired to design for the woman who sees herself as a modern ‘princess’ of sorts, or at least the woman wants to dress like one for a special occasion,” says Elaine. “Inspired by my recent travels to Europe and destinations like Monte Carlo and Sorrento, I wanted to create a collection with a sense of adventure and escape- while maintaining a very feminine and elegant design aesthetic. For this collection, I’d say I’m designing for a “Bond girl”- a leading lady who appreciates the spotlight, elegance and glamour- but can definitely take care of herself. ” The SS2011 Black Label collection will showcase exquisite couture gowns and cocktail frocks in a heavy palate of blacks, metallics, and muted jewel tones.

Shooting in the Mojave desert and famous dry lake bed of El Mirage, CA, the SS2011 Black Label campaign will feature appearances and stunts by actors Wendell Moore and Brandon Drozd, and showcase the talents of makeup artist Sonia Suttles, hairstylist Sona Beglaryan, and stylist Christina Ramirez. In addition to cinematography by Andrew Waruszewski and still photography by Jeff Gottlieb, the campaign video will be produced by Adam Powell, and co-directed by Adam Powell and James Berry. Hailey Harper, who has walked in many fashion week runway shows for Lauren Elaine, will make her campaign and acting debut for the line.

The Lauren Elaine label recently showcased at LA Fashion Week for LA ‘Rocks’ Fashion Week in March 2010, with a private showing at the Key Club, and recently launched the Black Label SWIM Collection with a private runway debut on June 28th at ‘La Vida‘ in Hollywood. For the SS2011 runway debut in October, Lauren Elaine will team up with the “Art of Elysium” to present a spectacular, celebrity gala and runway presentation. The event will be held at a private venue, location confirmed upon RSVP, with more details and invitations to be released at the end of September.