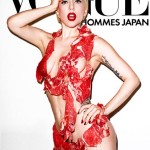 I really hope this gross me out look is not going to become a trend.  I thought I'd seen enough when we were forced to look at the cast of True Blood posing nude and covered in blood for the cover of Rolling Stone.  Never one to be upstaged, Lady Gaga is in on the act posing nude with what is loosely being referred to as a raw meat bikini for the September 2010 cover of Vogue … END_OF_DOCUMENT_TOKEN_TO_BE_REPLACED