You are here: Home / Beauty/Fashion / Fashion’s Night Out connects fashionistas worldwide on September 10, 2010 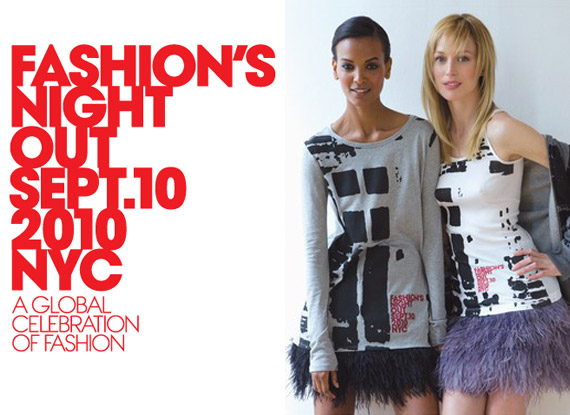 I love when I learn about cool stuff, especially cool fashion stuff!  September 10, 2010 is Fashion’s Night Out (FNO)- an event that allows everyday people like us, and fancy people, to preview designer’s collections, check out celebrities rocking high fashion, and more.  Now in it’s second year, FNO has its roots in New York City, but thanks to Vogue (US), the Council of Fashion Designers of America, NYC & Company, and the City of New York everyday people around the world in places like Japan, Spain, United Kingdom, and Turkey can also participate in cities within their home countries (see http://www.fashionsnightout.com/fno-elsewhere/).  The events are held in the evening at various venues throughout cities worldwide and take on the form of cocktail parties, runway shows, special after hours sales, celebrity guest appearances, etc.

So stop scheming like I’ve been on how I’m going to a legit invite to this Fall’s Fashion Week in NYC or dreaming of attending one in Paris or Milan, and take a look at what your city has to offer.  Typically, the major US cities have a wider selection of events, but I can always hope that Columbus, Ohio might surprise me with something like none other.  After all, we are home to retailers like Victoria’s Secret and Abercrombie.  😉

Check out the FNO PSA for this year’s festivities below:

Last year’s FNO in NYC included over 800 retailers across the 5 burroughs with special events showcasing designers and celebrities alike.  “Shoppers were able to see Sarah Jessica Parker singing standards with Oscar de la Renta, Mary-Kate and Ashley Olsen tending bar, as well as Michael Kors, Justin Timberlake, Kate Hudson, Rihanna and Gwen Stefani (just to name a few) at various stores throughout NYC supporting the industry. Retailers saw a surge of new shoppers and increased sales, while customers relished the street-party atmosphere.” (excerpt from FNO Facebook Fan Page)  It’s also a great boost to cities like Los Angeles who have typically struggled to make their mark in the global fashion scene.  Check out www.LAFashionNightOut.com for details on this year’s festivities.

Plus, check out Miami’s events on the Miami Design District website.

The official FNO t-shirt on www.FashionsNightOut.com is being made available by New York City (NYC); and a portion of the proceeds will benefit the New York City AIDS Fund in The New York Community Trust.

CBS, who has been doing extensive coverage leading up to this year’s FNO, is also producing an hour-long behind the scenes look at FNO that will air on September 14, 2010 at 10:00 PM.