You are here: Home / ifelicious music / Papa Roach breaks top 10 with “Kick in the Teeth” new album due out August 31 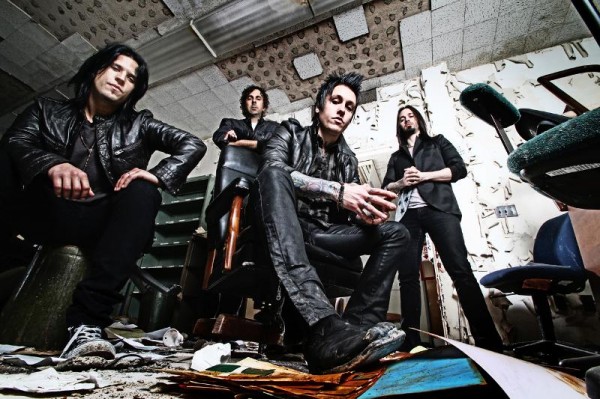 watch video for “Kick in the Teeth”

Hard hitting Sacramento natives, Papa Roach, have yet again cracked the top 10 with their new single “Kick In The Teeth,” which is currently holding down the #8 slot on the rock charts with no sign of slowing down. The band’s upcoming album “Time for Annihilation…On The Record and On The Road,” due out August 31st on Eleven Seven Music, is a unique hybrid listening experience, which showcases brand new material produced by David Bendeth (Paramore, Breaking Benjamin, The Red Jumpsuit Apparatus), as well as live renditions of the band’s past hits.

Papa Roach continues to fortify their reputation as one of the best live bands regardless of genre and recently electrified the 100,000 plus audience at this year’s Sonisphere Festival in the UK with an explosive performance of which Metal Hammer said, “The Roach are sensational for every second they are onstage. P Roach came, saw and kicked everyone’s ass.” In a review of the single, Billboard wrote, “Kick In The Teeth” may be its (Papa Roach’s) most rousing anthem yet.” In addition, ESPN is using the lead track throughout the network’s programming for the entire month of August to pump up the excitement of their comprehensive sports coverage including this years summer X-Games. Continuing it’s energizing force, Papa Roach and Monster Energy have partnered in an online contest for fans to submit user-generated extreme sports clips which will be cut together as a new video for “Kick in the Teeth.”

With over 8 million records sold, Papa Roach has produced multi-format hits on every album they have released over the past ten years, proving their longevity and relevance throughout. With “Time for Annihilation…On The Record and On The Road,” Papa Roach bring together what they do best by delivering a highly energetic entertainment package for fans old and new alike. With the release of this record, the band continue their long term commitment to Why Hunger, raising funds and awareness for the 49 million Americans and more than 1 billion people worldwide who are hungry. The band included a hidden track on the record, a first in philanthropy, to encourage fans to text to donate as they do live in concert.

Come on board – Papa Roach is geared up to deliver again – on the record and on the road. On top independent rock label, Eleven Seven Music, which gives the band the freedom to do things their way.