UPDATED ON SEPT 16, 2010 WITH ACTUAL WINNERS…  My picks matched up with 3 of the winners.  Oh well, we like what we like.  Congrats to all of this year’s winners!  ~Ifelicious 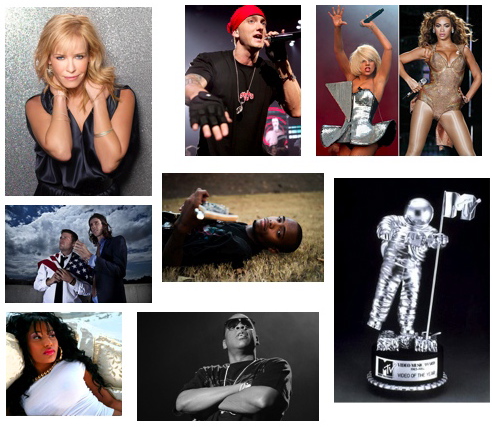 It’s time to post the nominees and make my Ifelicious picks for my fave awards show of the year- the MTV VMAs!!!  This year’s host is Chelsea Handler from E!’s “Chelsea Lately.”  The house band for the awards show will be Deadmau5.  I will be like you, watching from my couch as I got turned down for press credentials…the woes of a lonely lady blogger diva hottie, yet to be discovered… 😎

Lady Gaga and Eminem lead with the most nominations this year.  Lady Gaga has a record breaking 13 noms, even competing against herself in a few categories, while Eminem follows with 8 noms.  I’m on board with that since Lady Gaga is on fire right now and Eminem is blazing his comeback trail, too.  Per MTV’s press release, Lady Gaga stated:

“I’m so honored for all the little monsters and self-professed freaks of the universe, to have more VMA nominations in a single year than any artist in MTV history. Ironically, I’m even more proud it’s an unlucky number; 13,” said Lady Gaga. “A long time ago the world told me and my little monsters we would never be heard, together we changed the rules. God put me on Earth for 3 reasons: To make loud music, gay videos, and cause a damn raucous. Thank You MTV!”

“Apparently MTV doesn’t care that I have two massive stadium shows on the other side of the country the day after the VMA’s. F me, right?!?!,” said Eminem. “I mean, I’ll be there but don’t expect me to be nice about it.”

In its 27th year of handing out the coveted Moon Man statue, the MTV VMAs will air on Sunday, September 12, 2010 at 9:00 PM.  Until then, you can go online and cast your vote for the main categories at http://www.mtv.com/ontv/vma/2010/ (i.e. all but the professional categories i listed separately at the end).  The polls are open and will remain open until the VMAs air on September 12. In addition, text voting for “Best New Artist” is open to all wireless carrier subscribers by texting BNA to 97979. Also, Verizon Wireless subscribers can vote in all categories by texting VMA to 97979 (standard message rates apply).

UPDATE SEPT 9, 2010: MTV News is running a contest where you can win your very own piece of the VMA white carpet.  Just think, you can ponder about who’s feet were on your bit of history as you caress the carpet fibers.  Maybe Lady Gaga?  Eminem?  Beyonce?  Justin Bieber? Maybe Usher danced on it?  Maybe someone lost a piece of bling and you’ll find it?

The possibilities are endless!  LOL!  😆   To enter, go to http://facebook.com/mtvnews.

Below is the listing of nominees and my Ifelicious picks for this year.  I want to know yours, too, so leave me loads of comments.

The following have been classified by MTV as professional categories.  We don’t get to vote on these, but I’m going to make my picks anyway.  At the time of this initial post, I am only making my picks in 2 of the categories, but I’ll be making updates again soon!

Read all of my blog posts about the MTV VMAs of yesteryear by CLICKING HERE.