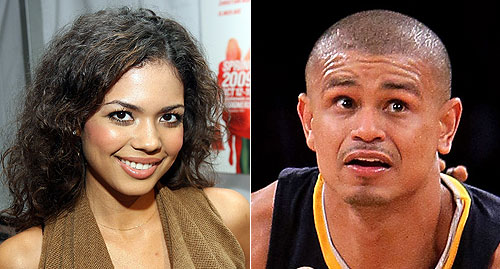 Not to make light of this, but I will for just a moment, but it seems like “My Wife and Kids” star Jennifer Freeman has been watching too many vampire movies and old episodes of “Good Times.”  You’ll see what I mean as you read further.  Jennifer, who married NBA player Earl Watson in 2009 and have 1 child together, became violent with Earl on August 1, 2010 after he went to check her cell phone upon receiving a late night text message.

As reported in TMZ:

Watson — who played with the Indiana Pacers last season — claims his wife was furious that he took the phone and reacted by hitting him “forcefully twice in the face with her right open hand.”

Earl claims Jennifer then tried to attack him with an iron — but he was able to knock it out of her hand.

After the attack Earl filed for divorce and custody of their daughter but has since withdrawn the petition. Bit his chest?  Went after him with an iron? That’s some psycho ishh, Jennifer, and I’m sure you have your own side to the story.  Let’s hope they seek the counseling they need.

Let this be a reminder, folks, that domestic violence goes BOTH ways.

Read more of my blog posts about Jennifer Freeman and Earl Watson by CLICKING HERE.