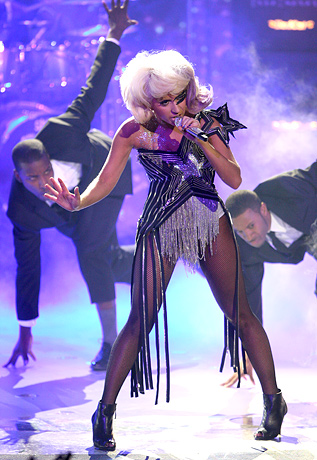 NEW YORK, July 26 (PRNewswire) — VH1’s new six-part series, “The Short List,” is an irreverent collection of celebrity and pop culture-filled top ten countdowns. If something exists in the world that needs to be simultaneously celebrated and mocked, it’s going to be here. And it’s going to be funny.

“The Short List” premieres Friday, July 30 at 9PM and ranks everything from the 10 Craziest Lady Gaga Fashion Moments to the 10 Biggest Celebrity Tools to the 10 Cutest Celebrity Babies. VH1’s patented blend of comedians, experts and commentators will dissect, disseminate and diss their way through each topic, ultimately justifying each and every totally awesome top ten ranking.

“The Short List” line-up kicks off with a look at Lady Gaga and her wildly eccentric, often questionable, fashion sense. The episode features some of the pop icon’s craziest outfits, including the red latex gown she wore to meet the Queen of England, her ubiquitous and revealing bubble dress, and the infamous Kermit-inspired frock that takes childhood memories to a whole new, creepy level. In addition to Gaga, the series dishes on everything from “Twilight” heartthrob Taylor Lautner‘s ripped beach bod abs to Suri Cruise‘s outrageous style, to reality TV meltdowns so crazy they make Mel Gibson look sane.

A new episode of “The Short List” premieres every Friday night at 9PM* starting on July 30 through September 3. Try not to watch it. We dare you. You might even learn something.