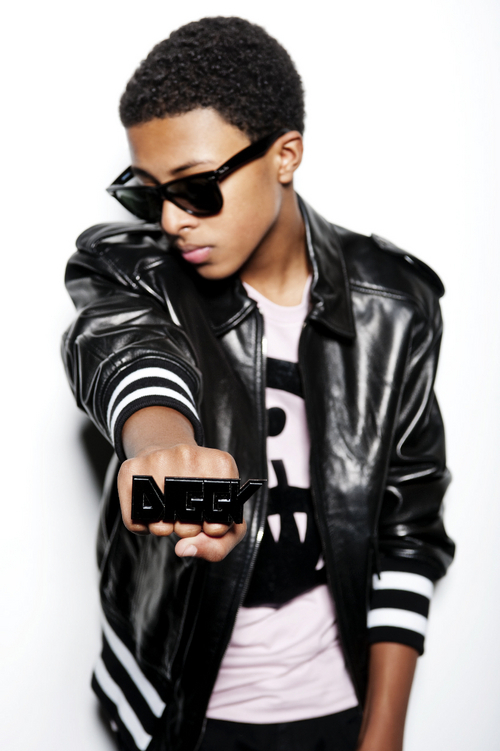 Vote for Diggy Simmons as MTV’s Breakthrough Artist of the Year!

The nominations are IN for MTV‘s Sucker Free Summit where the King/Queen will be crowned as THE BEST in Hip-Hop and it came as a shock to the #TeamDiggy camp to see “Diggy Simmons” listed in the same category as Jay Electronica, Big Sean, YelaWolf, Curren$y, J Cole, Donnis, Nicki Minaj and other magazine and chart topping MC’s 2010 has been blessed with.

“I feel very humble to even be in the category,” the younger Simmons stated in the conversation speaking on the nomination. “Just wow! WOW!” he continued. Wow is correct! Dropping his first mix tape, The First Flight, in December, being signed to Atlantic Records in March and now nominated amongst those the 15 year old admires, is an overwhelming feeling that no one can take from him. He is the youngest in the category and rightfully earned his spot with hard work and dedication; networking online to build a quality team on his own and staying focused, conquering his dreams – AMAZING!

Sucker Free Countdown is a two hour music countdown show that will enjoy artist visits and occasionally, artists serving as guest hosts. Sucker Free is the premiere destination for all things hip-hop on MTV2. From the lyrics to the lifestyle, if it happens in hip-hop, it happens there. SUCKER FREE SUMMIT premieres Sunday, July 25th on MTV2.

In other news, Diggy Simmons is set to make an appearance to Pharrell Williams’ Kidult Conference as a guest speaker on Friday, June 26, 2010 in New York. Sheraton New York Hotel and Towers, 811 Seventh Ave, New York, NY 10019. Tickets may be purchased for $45 prior to the 26th via www.kidultleadershipconference.com.