Vote for Diggy Simmons as MTV's Breakthrough Artist of the Year! Click HERE to vote! The nominations are IN for MTV's Sucker Free Summit where the King/Queen will be crowned as THE BEST in Hip-Hop and it came as a shock to the #TeamDiggy camp to see "Diggy Simmons" listed in the same category as Jay Electronica, Big Sean, YelaWolf, Curren$y, J Cole, Donnis, Nicki Minaj and … END_OF_DOCUMENT_TOKEN_TO_BE_REPLACED 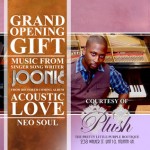 Official website- www.jooniezone.com Twitter- twitter.com/jooniezone Facebook- Joonie Gary Myspace- www.myspace.com/jooniesmusic Just when I think that the future of RnB and soul music's future lies in the hands of Trey Songz who thinks he invented sex, I am encouraged to see some fresh talent drop in my inbox. Such is the case for Joonie whose album "Acoustic Love" … END_OF_DOCUMENT_TOKEN_TO_BE_REPLACED