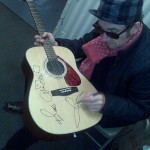 NEW YORK (May 28, 2010) - Continuing the spirit of giving back, in conjunction with the recently released "Indie Rocks! A Benefit Album for Malaria No More," RED Distribution further draws on the power of music to save lives by donating autographed guitars from four rock legends- Elvis Costello, Carlos Santana, Steve Vai and Third Eye Blind. Guitar bidding opened on May 25 at … END_OF_DOCUMENT_TOKEN_TO_BE_REPLACED