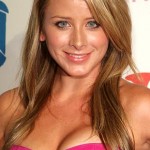 The press release below reads more like an advertisement than a news update, but I'm posting it anyway because inquiring minds want to know what folks from MTV's "The Hills" cast will be doing when the show ends this season.  It looks like Lo has picked up some work with Nivea.  You can even enter the challenge!  Nothing says weight loss motivation like a size 0 reality gal … END_OF_DOCUMENT_TOKEN_TO_BE_REPLACED