Aw naw, hell naw K. Michael done up an’ done it! LOL  😆 I loved me some Nappy Roots back in the day. Glad to see them get some visibility in the world of fashion- something I personally love about Khristian Michael’s marketing strategy. If you haven’t read my interview with Khristian, be sure to go check it out right now! (Haute shades: Interview with Khristian Michael of the Forever K. Michael Collection) …and then come back and read this, too!  ~Ifelicious 😀 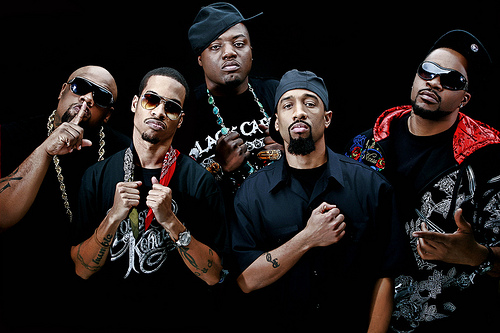 The Nappy Roots bring their unique brand of southern hospitality to the Forever K. Michael Collection’s “From Day, Till Dark” designer eyewear campaign.

May 12, 2010 – ATLANTA, GA – Founder of the Forever K. Michael Collection, Khristian Michael, announced today that the breakout group, the Nappy Roots, have officially signed on to the company’s “From Day, Till Dark” campaign. One of the most organic and uniquely creative hip-hop troupes to come out of Bowling Green, Kentucky, the Nappy Roots are the fourth musical artists to officially be endorsed by the company.

The Nappy Roots jumped feet first onto the music scene in 1998 with a highly-acclaimed debut album, “Country Fried Cess,” which was quickly followed up by more than ten notable record and mix tape releases. The 2002 RIAA-Certified platinum record, “Watermelon, Chicken & Gritz,” which featured classic hits “Aw Naw” (featuring Jazzy Pha) and “Po Folks” (Atlantic Records), earned the Nappy Roots an MTV Music Video Award nomination. “The Humingdinger” (2008) was another notch in the group’s belt with the hit single “Good Day” featuring dirty south hip-hop icon, DJ Greg Street and “Down and Out” with soul music luminary, Anthony Hamilton. With features on numerous film soundtracks (“Drumline,” “Friday After Next,” “Daredevil”) and video games (Madden NFL, NBA Ballers: Phenom), the Nappy Roots are now part of the brand new eyewear campaign that pays homage to artists who have inspired the designer. The Nappy Roots will be featured in a variety of Forever K. Michael print, television and online ads—along with other notable artists in the campaign.

The company’s Founder, Khristian Michael, says “The Nappy Roots are simply just a breath of fresh air. Their music, image and personalities are real and organic, and there’s nothing trendy about them…and that is something that is always in style. Their sound and positive energy has kept music fans engaged for over ten years, and that’s what I’m looking to achieve with the new campaign—as well as the entire collection.”

“We’re really excited to be attached to the Forever K. Michael [artist] campaign. Landing an endorsement deal with a designer brand like Khristian Michael’s—one that appreciates where we’ve been–fit our blueprint because the products are fresh, classic, and speak to everyone–just like our music,” said the Nappy Roots about the new venture.

“Music is a constant theme in my life—including my business endeavors. Building this brand is no different. It, too, includes a soundtrack of great music…and I wanted the Nappy Roots to be a part of that,” says Forever K. Michael Collection Founder, Khristian Michael. “They’re making a huge contribution to urban music and that inspires me on so many levels. I’m just giving back to artists, like the Nappy Roots, who motivate and inspire me to keep creating.”

The Nappy Roots are gearing up for the release of their brand new studio album, Pursuit of Nappyness, due in June 2010. Learn more about the group, promotional events and products from the Forever K. Michael Collection at www.nappyroots.com, www.myspace.com/nappyrootsmusic and www.foreverKMichael.com.

About the Forever K. Michael Collection

Forever K. Michael started as a seed in the spirit of the Founder, Khristian Michael. A long-term passion and affinity for high fashion urged the young stylepreneur to embark upon his own journey through the business landscape. In 2009, the Forever K. Michael Collection was put into motion and ultimately became a joint venture with renowned eyewear retailer, NYS Collection. The unique designer eyewear line is entirely handcrafted and constructed with Grade “A” materials to ensure quality and authenticity. With a sleek and sexy designer line poised to launch in the spring of 2010, both the media and consumers are abuzz with anticipation of this new brand that will be available in fine retail worldwide.